Constance– A Story of Transition CN: Were you a long term or short term transitioner, and why?
I was a long term transitioner. My last relaxer was on May 24, 2009 and I big chopped on April 5, 2010. So I transitioned for about 10 months. The reason I chose the long-term route was I wanted to be fully prepared and accepting of my natural hair. I originally planned on transitioning for 16 months, but I felt that I had enough knowledge on how to take care of natural hair and I was very anxious to fully know my natural hair without any permed pieces holding me back.

CN: What was your initial reaction to your hair?
I did my BC on April 5, 2010 with the help of my sister and I immediately loved my hair. I thought I was going to be a little hesitant of my 4B hair and was thinking about rocking a twist out or braid out. But, I loved my hair so much that I wore my full fro to work the next day…and was so confident and could care less if I received compliments or not. The only regret I had was not doing it sooner.

CN: How did your family and friends react to the new you? What was your response to them?
My family was very supportive and all liked it once they saw it. I have two sisters who are natural so of course they were very happy and supportive. My mother, father, and other sister were very hesitant when I told them I would no longer get perms and was going to wear my hair fully natural. I received questions like “But, you’re going to straighten it right?” However, once they saw my hair in a puff they really liked it and said it looked very nice. My dad even said that he was happy black women were starting to love their natural hair and wear it.

CN: What was your transition routine?
The first four months of my transition I would wear my hair in cornrows and would maybe put a flower in the side to accessorize it. Every week I would co-wash my hair with Herbal Essence Hello Hydration. I would then use Castor Oil Lotion, Cantu Shea Butter Leave-In, or Cream of Nature Lemongrass as a leave in. After four months, I was tired of wearing only the cornrows and bought a couple of wigs and would wear those over my cornrows. After five more months I was really hating the wigs with a passion! So, I then started wearing my hair in a braid out that was pinned up. The pinned up braid-out received numerous compliments and many people would say they just loved my natural hair—even though I wasn’t fully natural at this point. So after a little more than a month, I BC’d.

CN: Why did you choose to go natural?
I have always had a desire to go natural beginning in 2004, however; I have always been a very insecure person and was deathly afraid of what others would think. My two sisters who were natural wore their hair in its natural state starting in high school after they decided perms were not for them. Ironically, my mother would not let us have a perm until we were in high school and when I got my first perm at 15 y. o. I was excited. However, my sisters were not fans of it. Yet, about a year ago, I started to re-evaluate my life at 25 y. o. and I realized I needed to accept myself and love myself fully the way my Lord intended for me to. I was done trying to please my peers and decided to please myself. Also, I should have never denied my God-given texture and should have accepted that He made no mistake when creating me. So, what right did I have to conform His work? Pinned up braid-out while transitioning 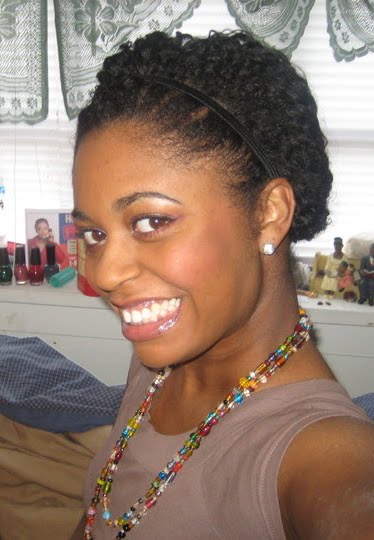 Completely natural about 2 weeks after my BC.