by Ejiro of The Mat and I

The past few weeks have been spent in a different kind of funk. The kind of funk that takes all the bad from the past and replays it over and over again in my head non-stop. At some point I was over it but didn’t really know what to do about it, so I just let it sit for a while, let it fester since that was what it seemed to want to do. The funk festered, ha. I went to Walmart to get a safe with the hubs, and the safes were right beside art supplies, and for some reason I really wanted some art supplies. So I got brushes, a pack of canvases, acrylic paint, sketching pencils, alphabet stencils, and some plastic paint containers and went home with that and the safe. After lollygagging for the evening, and after the hubs had gone to bed, I decided to get at it.

I ripped open the stencils and had the inspiration to write down as many disparaging words that had been used to describe me on a piece of poster board. When I started grabbing the letters to make the words that immediately jumped to the forefront of my consciousness, I realized that everything that had been said, and that I had internalized, centered around four words: SELFISH, FAT, LAZY, GREEDY. From, you are never going to make anything of yourself (LAZY), who is going to marry a woman who can’t cook (LAZY), why won’t you share your clothes with your cousin (SELFISH), do you really have to eat all that food you are done for the night (GREEDY), to, no wonder you are so fat with all the food you eat (FAT). 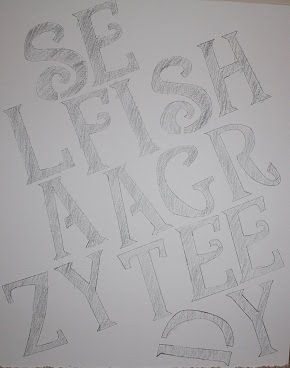 I was a child at the time that a lot of these scripts were laid in, and I felt that it was my fault because the only time I heard these was when I made a conscious decision to step out of my nuclear family unit to visit a distant relative, or when I went back to boarding school. After a while, I realized that exploration, voluntary or involuntary, resulted in some spirit breaking, ergo exploration was overrated.

These scripts have stuck with me for so long, and they are never far away from my heels. Instead of making decisions based on what I needed or wanted, I made most of them out of fear of embodying any one of those words. On Saturday night, I realized that I was done letting those words rule, I was done letting the fear lead the way. It could stay, but I wouldn’t let it lead.

* Great: I, like every human being, is capable of great good and great evil. We choose everyday what to manifest, and being aware of this fact makes it easy for me to be compassionate to myself and others when a slip happens.

* Embodied: I’m solid as a rock, it doesn’t matter if I’m fat or skinny as those descriptions are relative based on the constitution of the general population. So I say, irrespective of how I look, I’m embodied.

* Self Centered: This was one I heard so many times that I remember asking my sister once, “Oke what does self-scented mean,” yeah I was so young I couldn’t even say it right. Miriam Webster defines this word as “independent of outside force or influence or concerned solely with ones desires, needs, or interests.” This word has come to be synonymous with selfish. There is nothing wrong with being self centered, when you are centered in yourself you can better make decisions that are in your best interests and the best interests of others. When your definition of self is independent of outside forces, you don’t feel threatened when someone asks you to give of yourself for a cause- whether it’s time or money- you don’t feel the need to win at the expense of your fellow man. Most of all, when you are centered, you can fully take care of you, and when you are taken care of you can more efficiently take care of others. How can one have compassion for others when there is no compassion for yourself? How can you accept others for who they are, when you haven’t done that for yourself? How can you objectively tell a friend they are beautiful when you find something new to criticize about yourself every morning? Being self centered to me is about taking care of myself so that I can more efficiently see to the needs of others.

* Grounded: You say greedy, I say grounded in my needs right now. I need an extra bowl of rice because my body is existing in scarcity mode, if I eat at the expense of my brother then I agree, I’m being greedy, but if there is enough to go around well I’m just fulfilling my current needs. 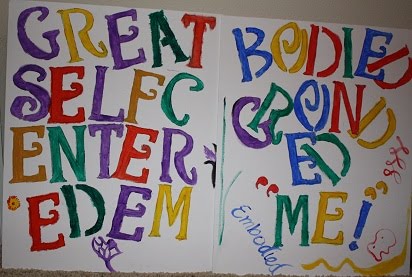 This exercise has been extremely helpful for me, essentially what I did was transform words that had a negative meaning for me into words that I could better relate to.

Do any of you guys have exercises that are great for rewriting self-defeating scripts? Please share!