Tears of Joy When the Perm Was Gone

By CURLYNIKKIJanuary 27th, 20217 Comments
by Richard Prince of The Root and the Maynard Institute
Television’s René Syler Says “I Hope Times Are Changing” 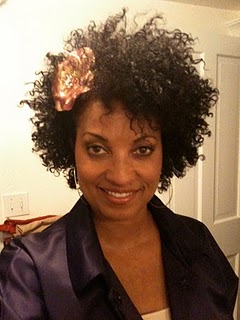 The last time many viewers saw René Syler, she was a co-anchor of CBS News’ “The Early Show,” with her hair chemically straightened and then hot curled. After four years, that job ended in 2006. She dealt with breast cancer surgery and other medical issues, wrote a book about being a “good enough mother,” started a website for those who have been laid off, and freelanced.

For her next job, though, you will see Syler with a new attitude and her hair in its natural, chemical-free state.

“I cannot describe to you the completely freeing experience this has been for me,” Syler told Journal-isms by e-mail on Monday, “how I cried in the chair after the last of the perm was snipped off and I-WAS-FREE! This is such a difficult thing for anyone other than black women to understand, but if you have a moment, do a quick search on YouTube under Big Chop. There are thousands of videos from black women who were like, screw this, I’m out… and have done the same thing as me :)”

Syler was reacting to the story of Rochelle Ritchie of WPTV-TV in West Palm Beach, Fla., who decided to let her straightened hair “go natural” during sweeps week and let viewers see the transformation process. It was a ratings success, as reported in this space on Friday.

“I do hope things are changing,” Syler wrote. “I went natural almost two years ago when I had bronchitis and ended up in the hospital. I had a meeting with CNN the next week so when I got out I went RIGHT TO THE BEAUTY SHOP for a touch up. Well, of course, my hair fell right out of my head. It was the last in a series of pretty bad events (I felt like Job!), some of which you know about. Anyway, as traumatic as that was, it was life changing for me in that I decided I would never take another TV job that required me to relax my hair! But over the summer I met with [a television executive] and when I told him my story he said ‘But I LOVE your hair!’ Cut to the chase, I am going back to TV with a project for them . . . It has not been announced yet but I will tell you more as soon as I can. But the bigger issue is I can be ME.. all my God-given curls will be on full display and I LOVE it!

“But that is entertainment where I think diversity of style is a bit more accepted, not so much in TV news, which is why Rochelle’s story is such a big deal. . . . I say all this to say I hope times are changing.”

Syler devoted a Web page to her hair transformation experience.

Republished with permission from The Root and the Maynard Institute