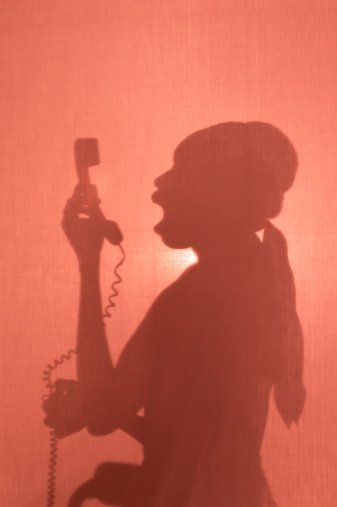 You may have seen our GEM Debate the other day where we asked if the Angry Black Woman stereotype, seen frequently in the media, made you mad.

We got a lot of reactions here on the site but the piece was also reposted on Curlynikki.com a blogger who happens to be a friend and one of my curly haired heroes. It was clear from the comments that poured in (almost 100 at last count) that the piece really struck a nerve. Some readers found the commercial offensive while others thought it was much ado about nothing. As someone who has spent more than two decades in television, it’s the latter that troubles me.

In talking with my husband last night we hit upon one possible reason; there really is a line of demarcation, if you will, in the racial attitudes among younger and older people. The Joint Center for Political and Economic Studies found that blacks and whites, ages 18-24 tended to be closer in their perception of race and racial issues than their older counterparts. That gives me hope but it doesn’t change the fact that there are real reasons to be concerned about commercials and TV shows that reinforce outdated stereotypes of ANY kind. So here’s why the Pepsi Max spot doesn’t sit right with me.

CABLE VERSUS BROADCAST TELEVISION: Let me give you a quick primer on cable versus broadcast TV. You all know you have to pay for cable; it is subscriber-based programming. The Super Bowl was on BROADCAST TV (free to anyone with a receiver) and seen by 111 million people. Compare that to Bravo’s (cable) The Real Housewives of Atlanta, which saw its largest number of viewers in January with 3.43 million, a drop in the bucket comparatively speaking. But the bigger issue is Bravo knows exactly who watches those shows and programs to meet for that specific demographic. People are actively tuning in (approving – or they wouldn’t be watching) to see Nene and Kim fight and otherwise act foolish. That is very different from watching the big game in your living room and having this commercial splashed across your TV.

TV IS A POWERFUL MEDIUM: With that primer under your belt, let me continue. Cable penetration in the US stands at just over 60%. Roughly 34% of the population receive their signal through what’s called alternate delivery systems (satellite, etc). That means roughly 6% of the country has access to over-the-air TV only. We know that TV shapes and at times, distorts, the way we see the world. I also know that, though it’s a small number, it is possible that say a 10-year-old boy in Omaha is part of that 6%. If he doesn’t have an opportunity to develop relationships with people of color, he could quite possibly formulate his opinions based on what he sees on TV. The permanent scowl on her face, her unloving actions toward her husband and the violence at the end of this spot do not paint this black woman in a very good light. What lasting impression does this leave on a child with no-one to counter that image? (BTW, movies fall into the same category as cable; you have to pay to see most movies so you’re not exposed without your tacit approval).

“THE ANGRY BLACK WOMAN IS NOT ME SO IT DOESN’T BOTHER ME”: It’s not how we see ourselves that is the issue and frankly the dichotomy between the truth and the stereotype is exactly WHY this should make people angry. Yes, she is NOT you. You know that, your friends and family know that, the people you go to church with know that. But the young boy who grew up in Omaha without a positive black role model does not. So when you are making a presentation in your 250,000-dollar a year job as a corporate attorney for some fortune 500 company and you need to assert yourself in order to set some snot-nosed, still-wet-behind-the-ears kid straight, through his limited prism, this is how he may see you. Not saying he will, but it is a possibility. Don’t kid yourself; there are many that jump right to that conclusion.

THE AD AGENCY: The fact that it got made at all is, to me, the most sobering part of this debate. Commercials like this get made when a company hires an ad agency and together they discuss what they are trying to achieve with the campaign. A storyboard is drawn up and everyone signs off on it. Figures show downright anemic numbers of blacks in US advertising agencies; they make up just over five percent of professionals and managers. Given that, I’m willing to bet there was not one black person on this campaign. So, (hypothetically speaking) our boy from Omaha is now the lead manager on this project and he draws up this spot and it gets made because there’s no person of color on the team who can warn them all of their blind spot. And before you know it, it’s on TV.

One of the commentators made another important point. She said the Angry Black Woman stereotype de-legitimizes black women’s anger. Think about that for a moment. Let’s say you have real reason to be angry (your wallet got stolen, you missed your train, you got passed over for promotion) but as soon as you go to express that legitimate feeling, you are categorized as an ABW. How many times have you had your period, got angry about something that was real, only to have someone pooh-pooh you because “you’re just PMS’ing”? It’s enough to send you into orbit, isn’t it?

Lest you think I’m hypersensitive I’m not wild about the YouTube spot with the nerdy looking Asian guy riding a moped through an office, complete with a panic-stricken look on his face. And it bugs me to see gay men as limp-wristed hairdressers when clearly many aren’t. Personally, I’d love to see more commercials like this.

Or how about Dennis Haysbert, using only his voice and good looks to sell insurance?

So to Madison Avenue: enough with the stereotypes of any kind. It’s lazy and uninspired. And to Pepsi: this black woman won’t get angry, I’ll just get a Coke; and one for my husband whom I love dearly.

But what about you? Does this change your mind about the Angry Black Woman stereotype? How does it make you feel about TV and the advertising industry in general? Start commenting everyone…