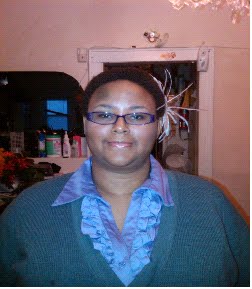 CN: Were you a long-term or short-term transitioner, and why?
M: I intended to be a long-term transitioner. I wanted to transition for about a year, but that didn’t happen. I made the decision to go natural on December 1, 2010, a week after my last perm and then cut half of my hair off in February 2011. About 2 weeks after that, I had the remaining half cut off. My transition time was shortened when I found what looked like and turned out to be a nice salon called Afrigenix that worked with natural hair. I went for a consultation and had the first cut. The second cut came about 2 weeks later when I was a hair model for Ouidad, but I was too chicken to forgo all of my hair then.

CN: When did you BC? What was your initial reaction to your natural hair?
M: On March 24, 2011, I BC’d for my birthday. I was shocked by how much hair was there. It was soft, fluffy, and big. I felt cooler and more awesome. It was very cold in New York that day. So despite my interest to walk around fresh from the salon in all my curly fluffy glory, I had to wear a hat. Sniffles and head colds aren’t cute.

CN: How did family and friends react to the news of you wanting to go natural? What was there response after you chopped? What was your response to them?
M: When I first made my decision, I was at work. I told one of my coworkers about my decision, and he thought it was pretty cool. Everybody else I told simply said, “Okay, it’s your hair.” Nobody made a big stink when I did my cuts. They said it’s my hair, and if it makes me happy, to go ahead with my decision. Apparently my head and face are a good shape for short hair. Only one person had a concern. A friend of mine, who was also natural, asked me, “What would my job say?” I work in a corporate environment and understood her concern. My managers are cool, and as long as I don’t come in with some utterly ridiculous hairstyle such as a purple and lime green Mohawk, they wouldn’t care. Then, after doing some more research, I found out my hair in a natural state was untouchable. For anyone at my job to tell me my position was in jeopardy because of my hair would be in violation of my rights because it qualifies as race discrimination. The U.S Equal Opportunity Commission says:

“Race discrimination involves treating someone (an applicant or employee) unfavorably because he/she is of a certain race or because of personal characteristics associated with race (such as hair texture, skin color, or certain facial features). Color discrimination involves treating someone unfavorably because of skin color complexion.”

So when I saw this, I was even more gung-ho and decided fluffy, puffy curly hair here I come! If you want to read more about it you can go to the EEOC website: http://www.eeoc.gov/laws/types/race_color.cfm. When I actually cut it off, a couple of people questioned why. I told them that I wanted to, and they said okay. I don’t think anybody actually cared. I was happy. They were happy about my being happy, and they all said it looked interesting.

CN: What was your transition routine?
M: The first thing I did when I made my decision to transition was flock to the internet! I lived on sites like CurlyNikki and NaturallyCurly, investigating natural hair products, techniques, and what it meant to be natural. Being natural meant so many things like using products with only natural ingredients, using things made from natural ingredients, not using any heat, and not using products with this or that. The only thing I saw that seemed consistent was getting rid of the processed hair and finding things that you, your hair, and your wallet liked. After looking up some products, I bought ORS Tea Tree Oil/Grease, Jane Carter Curl Defining Cream, Garnier Fructis Triple Nutrition Nutrient Spray and some Herbal Essence None of Your Frizziness Leave-In Conditioner. Essential oils were and still are really expensive. All of the things I read said washing your hair less is better, but do to a scalp issue, I have to wash it twice a week with medicated shampoo. So I alternated between a medicated shampoo and co-washing.

CN: What was your staple hair style during the transition?
M: A flat twist-out was the main style. I wore my hair in kinky twists for about a month. However, I missed my hair, and it itched horribly no matter what I tried. So after a lot of frustration and itching, I took those out and lost some hair on the front of my head. I went back to my flat twist-out. That was my style until I chopped.

CN: How did you moisturize your hair to prevent breakage at the new growth line?
M: Water and spritzing with water. On occasion, if I remembered and had time, I’d DC or do a hot oil pre-poo. Towards the end of my transition, I started sleeping with conditioner in my hair while wearing a shower cap. It was so soft in the morning.

CN: Why did you choose to go natural?
M: Deep down inside, I always wanted to go natural but didn’t know it. I would see black girls with pretty curls and wanted know how that was done. I wanted to know what it was called so that I too could go to the hair salon and after getting my touch up, have them put that style in my hair. Then while watching some clips on Essence.com, I saw that the curls I wished I had wasn’t some style some lady in a beauty parlor could do to my hair, especially while it was all flat and straight with a perm in it. It was already there, all I had to do was let it be free! Free in all its squiggly, fluffy, awesome glory. That’s what did it for me. 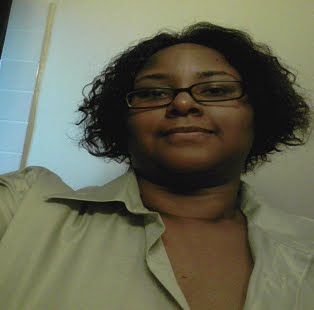 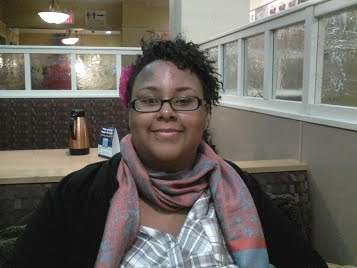