Arguably one of the most popular of all of the Real Housewives, this diva needs no introduction, honey. With her no nonsense attitude and fierce Georgia style, she keeps us laughing every Sunday night on Bravo. In a class all her own, NeNe Leakes is the Joneses. Game recognize game and as a fellow entrepreneur, I can’t knock her hustle… had to get her On the Couch, plus y’all know how much I love RHOA! Enjoy!

CN: Did you see this for yourself? The flashing lights, the fame…

NeNe: Yes. I’m actually living my dream. As a young girl, I did theater and dance and dreamed of becoming an actress. A lot of people in life don’t get to live their dream. I’m grateful to be living mine, I just never thought I’d be living it on a reality TV show. What I did not know was that being on television came with a lot of other stuff. It’s been very bitter sweet. It’s been a sweet thing because I’ve been able to fulfill my dreams and have opportunities come to me that I wouldn’t have had without this platform. But it’s also extremely bitter because people are talking about you and saying very negative things and judging you without even knowing who you are. So there’s a lot that comes with the fame.

CN: Haters. Katt said if you got 14, you need to get to 16 by Christmas. How do you cope with them? Does it affect you?

NeNe: It totally affects me. I mean, I’m human. You have to have a strong support system and know that the people around you support and believe in who you are. So you really should only focus on those people that matter. For me, I have girlfriends, I have family members who really support me no matter what is happening or being said because they know who I am and they give me strength to carry on. And there have been many, many days that I felt like I couldn’t do it anymore.

CN: You are the star of Real Housewives of ATL and I don’t think many people would disagree with that. I’ve heard folks say, ‘NeNe has changed since the first season’, what say you?

NeNe: It has changed me. I think that it has to change you. I don’t think that you can be on a platform like this and not change.

Before, I was just a normal girl that could go inside of Target or Walmart and now I can’t, and just that alone changes you. Believe it or not, I’m a loner. I like to be by myself from time to time to gain peace of mind. I used to be able to drive my car and pull up to Walmart, get out and walk in and no one would say anything to me. But now, I don’t have that freedom. I can’t get out of my car without everybody stopping me and wanting to talk or take pictures… and all I really wanted to do was shop. So yes, that changes you. I have stalkers now… which you normally wouldn’t have, I’d imagine. It has to change who you are. I would have to say that I’ve grown a lot. I wouldn’t say that I’ve changed for the worse, I’ve certainly changed for the better.

CN: I’m sure it’s made you stronger… that thicker skin I hear about…

NeNe: Absolutely. When you go through things it absolutely makes you stronger. Going through things are a blessing actually. Those are the things that are going to shape you and make you into a better person.

CN: How do you stay grounded?

NeNe: I’m very regular. I’ve never really cared about fame. I never walked around and said, ‘I want to be famous’. What I used to say was, ‘I want to work’. All I wanted to do was work, make a check and take care of my family. F’ the fame, that doesn’t help me in any kind of way. At the end of the day, I don’t really care about being famous or signing autographs… what’s important to me is being able to provide for my family. So those things make me NeNe, they make me regular. Every body thinks I’m fabulous. Really, I’m just a Tshirt and jeans kind of girl. You see what I’m wearing today. I don’t wear makeup everyday, I don’t even get my hair done everyday. It’s probably because I grew up in a small southern town… it stayed with me because I continue to be humble and down to earth.

CN: How do you respond to the comment, ‘Real Housewives of Atlanta perpetuates the angry black woman stereotype’?

NeNe: Well, I’d have to say that I agree. It perpetuates just that. I watch the show too.

We shoot for months and months and we can shoot great happy scenes and scenes where there’s no drama but once it hits the air, they’re only playing scenes where there were arguments. So yes, I would have to agree. I feel like there is a lot of negativity in reality… you have to be a very strong person to do a reality show. There are a lot of people that say they want to do it or they want to be famous, but reality shows are very difficult. And they do play on the negative.

CN: It gets the ratings.

NeNe: [Laughter]. We are the highest rated in the franchise and our show does seem to focus on the whole negative thing quite a bit. There are some girls that are really okay with it. There are others like myself… I’m really not okay with it. I’m strong, I happen to know who I am, I’ve been through a lot, I’ve learned a lot… I don’t thrive off of the negativity.

CN: You’re a reality star, entrepreneur, and now a single mom. How do you balance it all?

NeNe: Well you know, it’s difficult. I never pictured myself as a single mom… once I got married, I thought it was forever. Gregg is still very much in my life, we just don’t live together. I do have Gregg’s support… he does help me out with the kids, I have to give him that. He’s a good dad. So with the help from Gregg and some higher help, we make it work. I’m out of the state right now. My kids are in Georgia and I’m in California and it’s difficult.

CN: In an episode this season, you told Cynthia that Gregg came over and one thing led to another… and in the end, he laid. it. down. Given your history and his ‘abilities’, is there a possibility that y’all would get back together?

NeNe: [Laughter] We had been together for 15 years and I’ve known him since I was in my 20s and I must say that it is definitely a possibility that we could get back together at some point in our lives. It’s just that right now, it’s very difficult. The reality show is hard on Gregg, it’s a strain on our relationship. I think that Gregg and I have a lot of love for each other, so it’s definitely possible.

CN: Besides Apprentice, what other opportunities have come your way since the last season of Real Housewives of Atlanta? How do you pick and choose which ones you want to do?

NeNe: Well I have an agent, manager and lawyer, and we all team together to think about what’s best for the brand. Granted we have many opportunities that come to us and I’d like to take all of them, but I have to understand that everything is not for me. Since last season, I’m a restaurateur. I own a restaurant in the Sacramento Airport called Famous Famiglia. CN: Work! Tell me of this Miss Moscato… can I get a bottle? I’m what some would call a connoisseur…

NeNe: [Laughter] Yes girl, you know I love wine! I have my own wine out called Miss Moscato. You’ll love it. I also have my line of Tshirts out with my sayings, “I’m very rich’, ‘I’m very rich bitch’, and ‘Bloop Bloop’. I have two different lines, one blinged out with Swarovski and they go for $150 a piece, and since I know that everyone can’t afford a 150 dollar Tshirt, I have the cheaper version that’s $54.99…. it looks like Swarovksi, but it’s not. I’m also working on a line of shoes. 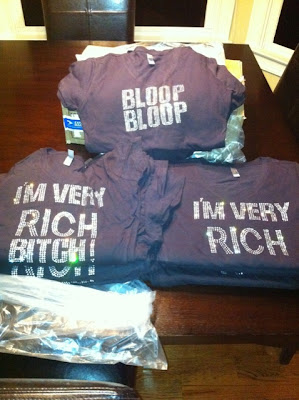 Besides, that, I also have a lot of TV opportunities that have come to me. Television and film. I just recently guest starred on Lets Stay Together, and Reed Between the Lines. I’m in LA working on a major show that I’m not allowed to talk about.

CN: Get your paper booboo!

NeNe: Since my reality show success, I’ve come to believe that what’s for me is for me. I don’t try to stop anyone’s blessings and I really don’t appreciate when people try to stop mine. I don’t go after these jobs… often times, people come and find me and that’s how I know that it’s meant for me. And I credit that to the show. The show has been great at this. It’s a great platform. Some people love me and some people love to hate me and all of that just works for me. Because I personally believe that I have favor on my life.

CN: Any advice for my readers thinking about a new business venture?

NeNe: I have to say that it is scary when you don’t know what the future holds. It’s always scary. You have to step out on faith, that’s all you can do at the end of the day and say, ‘it has to work for me’, and do it. And certainly, there will be set backs and moments when you feel as if you can’t go on, but you have to keep trying. If it’s something that you really believe in and something you really want to do, you will find the strength to keep trying. ‘Cause I can tell you this, there is nothing like living your dream.

CN: This is a hair blog, so I must [Laughter]– have we ever seen your hair on the show?

NeNe: I get my hair pressed. [Laughter] My hair is wavy. People think I wear wigs, but I don’t. I don’t even like wigs. During the first season, when my hair was longer, I wore a weave. But you know how it is… when you start weaving you get really addicted and when you get it taken out, you’re like, ‘oh my gosh, I hate my hair’. So I cut it short and rocked a weave, and I would take pieces out and pieces out until I got more and more comfortable with my own hair. Every now and then, I’ll put a track in my bang for volume and color, so I don’t have to color my own hair.
But that’s it. The rest of my hair is pressed. It’s very thin naturally. I used to get a relaxer but it thinned it out even more. I like to play in hair color too much to perm and it’s always dangerous to try to do both.

But I love my short hair honey. My girlfriends say you should try to go long or wear a wig. I don’t’ like wigs. I don’t like long hair, it gets on my nerves… when my hair was longer, I would always do a ponytail or pull it back. I didn’t like it in my face. Plus, I’m thinking outside of the box. On my show everyone has long hair. They all have long hair, they all look the same… I can see one or two, but everyone’s hair is the same. These girls aren’t really smart, ’cause just that alone, makes me stand out. I’m short and blond. It works.