In a 2015 interview with Steve Harvey, when asked about the status of her dating life, Taraji P. Henson declared: “I’m a grown woman…if there’s nothing on this (ring) finger, no one gets claimed. You don’t get claimed until you claim me.”

Well her beau Kelvin Hayden must have taken note because 3 years later, Taraji is now a fiance and wearing it well! 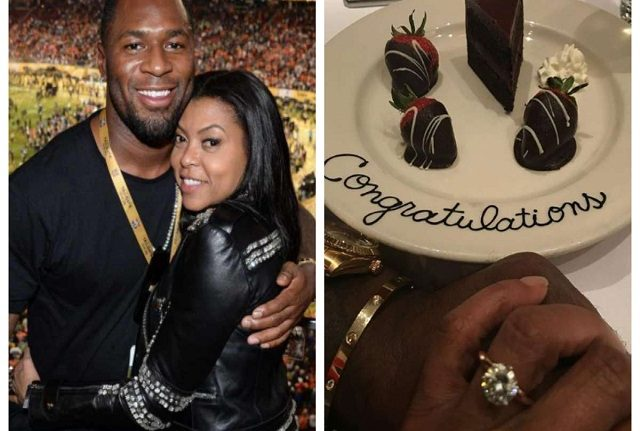 The actress has kept her dating life private and it was not until last winter that she confirmed she and Hayden’s romance. Prior, our favorite Cookie kept her love life in a jar and focused on her career and her son, that she raised as a single mom. Not getting her big break in Hollywood until she was 29, she preached on the importance of women focusing and discovering themselves before setting their sights on a sweetheart neckline wedding dress and a white picket fence with Prince Charming. Never one to race against time and aging, Taraji’s life has come full circle at 47-years-old with an enviable career and a FIONE former NFL player as a soon-to-be husband. With a now-adult son, she is able to embrace all that is in front of her. Her new ring serves as the icing on the cake to her commitment to not settle and is a good example for all women to follow.

Many of us feel a sense of urgency on the other side of our 20’s and in our 30’s to marry and start a family. Sometimes it’s due to our own vision of where we think we should be; and, other times it’s because our friends are jumping the broom and birthing babies. We find ourselves asking, “Should I start looking for my Mr. Right?” or “When will my time come?”

Marriage and a family are a beautiful thing, but only under the right conditions: when two people are in love, desire and are ready for the same thing. The problem is wanting a marriage and family so badly that we take whatever is offered to us…first. Everybody knows somebody who wanted a hubby and baby so much that they married and got pregnant too quickly and it ended up horribly.

There’s nothing wrong with being single, or enjoying your relationship at every phase. What a lot of women tend to forgo when they rush into marriages and families is the time to truly explore themselves. Not that marriage is final and once you say “I do” you won’t have the opportunity of self-discovery. But, the thing you lose when two become one is the right to be selfish. Once you are married, you have to think about you and your partner. When single or in a non-marriage relationship, there is a greater sense of freedom, or wiggle room to “do you.” Even if you live together, there is a bit more flexibility.

I’ve been in a long-term relationship myself and can understand both sides. I’ve gone to college in a different state, studied abroad, changed jobs multiple times, and I travel at almost any given second. Thankfully, I have a partner who understands such and has never made me feel as if he wanted to restrict the things that I do and vice versa. But, to many, our relationship is too unconventional. Many don’t understand that we made a commitment to each other that while in our 20’s, we would go after our goals individually and together, keeping a line of communication open regarding what we wanted. Doing so has made us closer, our desire to stay with one another and eventually marry even stronger, and we’re more content and happy as individuals.

Friends in our age group, on the other hand, have not been so lucky. I know a ton of people who are in relationships with people who don’t support their personal goals but stay because they want to be wives so bad and dream that this is “the one.” Others are married and feel trapped because they have someone they feel they have to answer to. Some have children, whether married or not who constantly put themselves last because they in essence have to…to a large extent. Many in these situations often complain that they wished they would have done more themselves before making those decisions and commitments. Only a small portion have different experiences.

I know every situation is different; however, I strongly believe that regardless, as women we have choices. Taraji herself was a single mother at one point with minimal resources but made herself (and her son) a priority. She moved to LA at 26 with $700 and her toddler and made it work. And, it paid off.

Thankfully, this narrative is shifting. More and more women are embracing being single or are more content than our aunties may have been in their day with being in long-term relationships without having the desire to rush into a marriage, choosing to do things their way and on their time. Hell, a lot of people don’t even consider marriage. Regardless, I think that Taraji ‘s story is one that should be celebrated, whether marriage is the goal or not.

Are you content being single or in a relationship? Did you wait until the right time for marriage?