By now the world has learned and is mourning the passing of the Queen of Soul, Aretha Franklin. For the past 60+ years, she’s provided a musical soundtrack crossing as a backdrop to an ever changing world. Donned one of the greatest voices of all time, her gift crossed multiple genres, generations, racial, political, social and gender barriers. A true artist, she led with her voice, remaining mum on an evolving tabloid driven industry, sharing only what she felt she owed us- her music.Outside of her catalogue was a world-class diva with a sparkling personality who gave fans much to watch whether dressed to the nines or throwing the best shade. In her honor, here are some of my favorite moments from Re-Re.
Continue

You can tell an old schooler from a new schooler by the lack of care for looking cute while doing their thing. Patti flaps her arms like wings, rolls around on the floor kicking and screaming and will take her shoes off in the middle of singing her first song. Mary has the old school bop down to a science. All of the greats burst out into a sweat during their second set. But I have never…and I mean never, witnessed a wig emerge off of a performer’s head voluntarily. The song must have been vexed so deep within Reefa’s spirit that only a wig snatch could do it justice. When the holy ghost hits you, you go with it. An Anthem for Civil Rights & Feminism
I doubt she knew when she sat at a piano in 1967 and birthed R-E-S-P-E-C-T that the song would be as iconic. Otis Redding originally penned the song in 1965 to reinforce the traditional family structure: Man works all day, brings money home to wife and demands her respect in return. Never conforming to gender roles, Aretha wrote her version as a response, this is pre-No Scrubs vs No Pigeons days! It registered to women nationwide and remained #1 on the charts for 12 weeks. The civil rights and black power movements adopted it next with racial protests occuring around the country.

Faith
Born and raised in a church-going household to a Baptist Minister as a father, she held tight to her faith throughout her life. Her 1972 Grammy-winning album “Amazing Grace,” which was recorded live at New Temple Missionary Baptist Church in South Central Los Angeles and featured gospel legend James Cleveland, became one of of the best-selling gospel albums ever. Her gospel underdone was always present in her music and she spoke often on her love for God, saying “My faith always has been and always will be important to me.”

She Rode for Angela Davis 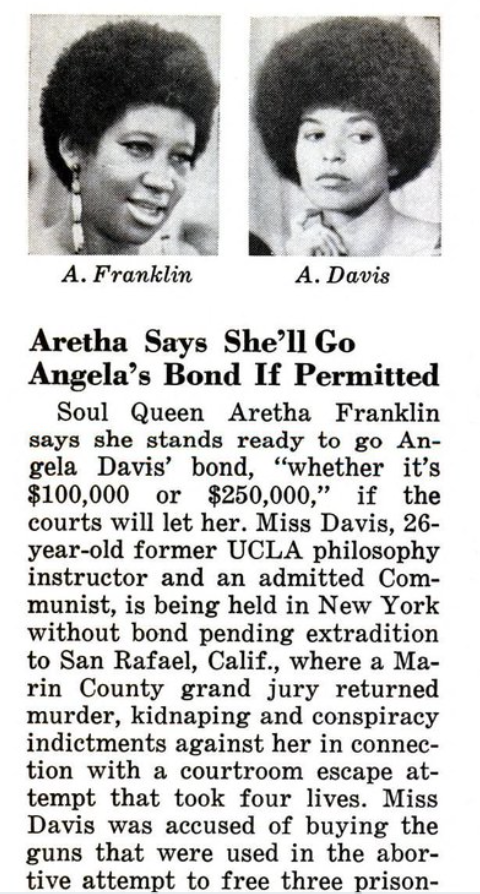 As a vocal supporter of the Civil Rights movement, she performed at benefits and encouraged voter registration. But other work was kept relatively private, including financially supporting Martin Luther King Jr.’s work, the families of incarcerated people and black activist ministers. That changed after she was quoted in a 1970 JET magazine article detailing her intention to post bail for Angela Davis. She put her reputation and career in jeopardy by rallying behind Davis, stating: “I’m going to see her free if there is any justice in our courts, not because I believe in communism, but because she’s a Black woman and she wants freedom for Black people. I have the money; I got it from Black people—they’ve made me financially able to have it—and I want to use it in ways that will help our people.” 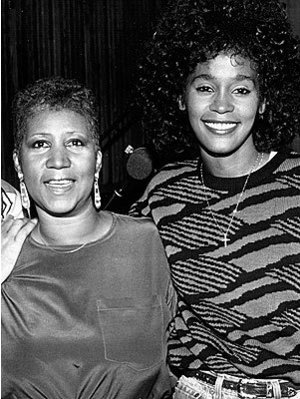 Aretha’s a trip. She’s always been referred to as Whitney’s godmother and even spoke about their relationship in an interview with Wendy Williams. Many were surprised to see that she was absent from Houston’s funeral and confused when Dionne Warwick introduced her to give her thoughts at the podium and had to come back and announce that she was not present. But it wasn’t until 5 years later that Aretha gave her side to the story to AP and even denied she was her actual godmother. Whew Chile!

Aretha Shades Patti
Remember Aretha was caught on camera ignoring Patti when she reached her arms out for a hand and Aretha snatched away? Despite both denying a feud and appearing on The Oprah Winfrey Show together in the past, but Re never seemed to care for Patti. There were rumors of discord for years but none have been confirmed. 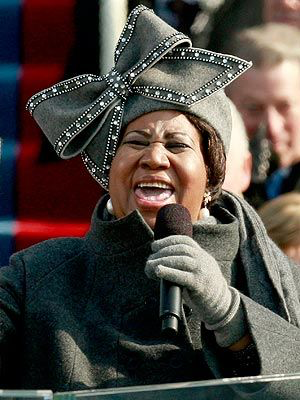 Aretha at the Smithsonian?

After her hat made its debut during her performance at President Barack Obama’s Inauguration in 2009, the Smithsonian wanted it for display but Re wasn’t sure if she was ready for that. “I am considering it. It would be hard to part with my chapeau since it was such a crowning moment in history. I would like to smile every time I look back at it and remember what a great moment it was in American and African-American history. Ten cheers for President Obama,” she said in a statement to New York Magazine. Shows Re was a woman of thought and integrity!

Thanks Ms. Franklin, for giving us the example of a natural woman! May you sing from the Heavens!