Is It Wrong To Call Your Kids The N Word? 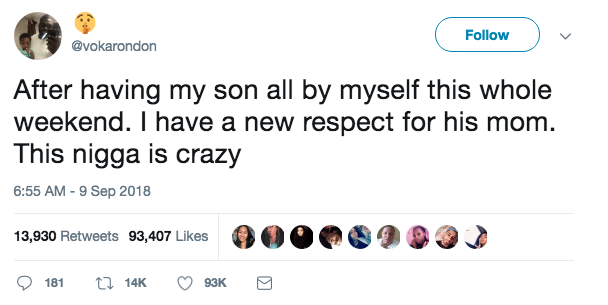 If someone decided to conduct an experiment to determine the most-used word in my vocabulary, I would tell them to save their time and energy. I can answer that question myself. The word is n*gga. I can hear the disappointed groans from those of you who argue that we should’ve buried the word a few years ago. I’ve heard the arguments from folks like Oprah who remind us that n*gga was the last word Black men heard before they were lynched or murdered.

I hear her. The history and pain of it is deep and not to be understated. But the provocative nature of the word just make it that much more alluring to me. Still, there are times when I wonder about its appropriateness.

When I talk about appropriateness I mean amongst ourselves, other Black people. I remember feeling a bit heartbroken when I saw that owners of a clothing store in Malawi decided to name their business “N*ggers.” I was taken aback by my fiancé’s cousin’s use of the word—mostly because he was born, raised and living in South Africa. I think of the word in the context of Black American history and struggle. And it’s odd that African people would want to adopt that narrative; not only because they hadn’t lived it, but because why adopt additional struggle? Then again, even those Africans who managed to avoid the Transatlantic Slave trade still know a thing or two about being treated like a n*gga, thanks to colonization.

But I’m also conflicted about the use of n*gga when it comes to Black children. The other day, I stumbled across this tweet from a father, frustrated by his son’s antics.

I immediately laughed at this tweet, thinking only of the humor of a little boy terrorizing his father into appreciation for his mother. But when I told my coworker-friends about the tweet, I wondered for the first time about his use of the word n*gga in reference to his son.

In my mind, n*gga can be and is often a term of endearment when used amongst Black folk. It’s for us. I call it our birthright. The way we’ve taken something that was meant to oppress us and turned it into something to unite community is beautiful and certainly symbolic of what Black people have had to do in America.

Still, I get the sense that children hearing the word at home from their parents and then being told that people of other races aren’t supposed to call them that might be confusing. This man called his son a n*gga on Twitter. And I presume he can’t read yet and doesn’t follow his father on the app. But in my search, I stumbled upon people who used the word to address or discuss young children and they were standing right there. And it didn’t feel right.

I’m aware that kids are often more capable of processing complex concepts than we give them credit for. But admittedly, there’s something adult about it. I balk at even teenagers using it in public because I wonder if they really know what they’re saying. There’s a responsibility that comes with the use of the word.

The tweet made me ask myself do I plan on calling my future child n*gga. And it’s a loaded one. It’s funny but I can’t see myself staring into the face of an infant saying, “I love you lil n*gga.” Even if I didn’t call my child that to her face, the thought that someone else would read something I wrote and in turn refer to her as a n*gga troubles me.

What do you think? Is it wrong to call children n*gga?