By Jacqueline SamarooApril 29th, 2021No Comments 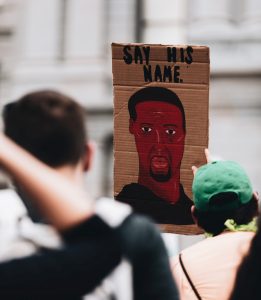 Photo by Logan Weaver on Unsplash

Yesterday, Derek Chauvin was found guilty in the murder of George Floyd. The evidence was there. The witnesses said what needed to be said. The whole world saw Chauvin kneeling on George Floyd’s neck last summer. Still, when we learned that a verdict had come in and would be announced shortly, there was a sense of doom. Black folk, across the diaspora, felt sick, wondering if the jury would make the right decision and convict this man for the crime we saw him commit.

And while there was a sense of relief, it took the perfect cocktail to ensure that Chauvin would be held responsible for unjustly taking another human life.

We had to be in the midst of a pandemic, removing some of the distractions that would have helped us to ignore this injustice.

The violent incident had to take place in the daytime, in public view.

George Floyd had to have been fully restrained, not resisting at all.

He had to say he couldn’t breathe.

He had to call out for his mother.

EMTs offering medical assistance to Floyd had to be shooed away.

And most importantly, it all had to be captured on clear, unobstructed, undeniable video.

For those who don’t know, this video that has been seen and shown all over the world, that has been analyzed, mined for screenshots and used to determine that it was 8 minutes and 46 seconds that Derek Chauvin had his knee on George Floyd’s neck was captured by a then 17-year-old Darnella Frazier.

There was no way, Frazier realized that she was recording a pivotal moment in history.

I’m sure Darnella Frazier couldn’t have anticipated that her cell phone footage would spark protests across the entire world. She was just running to the store last May when she recognized that Chauvin was being unnecessarily aggressive and violent in his arrest of Floyd.

Darnella couldn’t have known that what appeared to be a violent arrest was actually a murder.

The day after Floyd’s death, Darnella told Now This, “I’ve seen him die. I posted the video last night and it just went viral. And everybody’s asking me how do I feel? I don’t know how to feel. ‘Cause it’s so sad bro. This man was literally right here 8 pm yesterday.”

Not only did Darnella Frazier record the video, she had the wherewithal to post it.

Sadly, being a Black woman doing anything on the internet, her decision to share was met with claims of “clout chasing” from folks online.

Darnella, who described witnessing the incident as traumatizing, immediately refuted the claims, writing on her Facebook page:

“I’m doing it for clout ?? For attention?? What ?? To get paid ?? Now y’all just sound dumb and ignorant!! I don’t expect anyone who wasn’t placed in my position to understand why and how I feel the way that I do !! MIND YOU I am a minor ! 17 years old , of course I’m not about to fight off a cop I’m SCARED wtf…If it wasn’t for me 4 cops would’ve still had their jobs , causing other problems. My video went world wide for everyone to see and know !! His family was reached out to! The police most definitely would’ve swept it under the rug with a cover up story. Instead of bashing me , THANK ME! Because that could’ve been one of your loved ones and you would want to see the truth as well.”

It’s only now, nearly a year later, that we understand how right she was.

The tactics police employ to protect their own know no depths. And there’s no telling what would have been said in order to besmirch George Floyd’s character and to keep Derek Chauvin on the force, able to terrorize and possibly kill other people with his violence.

What if Darnella Frazier had not been there? What if she was so shocked by the crime taking place in front of her that she froze and didn’t record? Or what if she was so disturbed by the footage, she decided to delete it rather than share it on social media—where her character would later be called into question?

George Floyd’s name might have become a hashtag but there’s no question in any of our minds that Derek Chauvin would have never been held accountable.

In the fight against police brutality, it’s often the men and boy’s names who we remember. Dr. Kimberlé Crenshaw created #SayHerName because Black girls and women rarely receive the same concern and passion of their male counterparts. Police brutality is far more than just an issue affecting Black men. The lack of reciprocity in the movements have often left Black women wondering if we should continue to fight for Black men who historically have not been willing to return the favor.

It’s a question that has to be answered on a personal level.

But I’m inexplicably grateful for Darnella Frazier’s decision to record and post such a painful and traumatic moment in her life on Facebook, an app designed to connect us socially. In a very twisted way, it served that exact purpose. The world saw a human life being snatched and it responded appropriately. But none of that happens without Darnella Frazier.

We owe this unusual bit of accountability in an unjust and cruel system to her.

We owe the collective sigh of relief we breathed yesterday to her.

We owe the semblance of peace we felt yesterday to her.

The credit for Derek Chauvin’s sentence doesn’t belong to the judge, the jury, our justice system, or the consciousness of the American people. It belongs to Darnella Frazier for her courage, her refusal to remain silent, and her decision to shine a light on something she knew wasn’t right.

Yesterday, after the verdict was announced, Darnella took to her same Facebook page and wrote:

As the years pass and stories are told, we often find that Black women and our contributions are erased. The biggest and greatest accomplishments are attributed to men and men alone. But when we tell the story of George Floyd and the conviction of Derek Chauvin, we owe Darnella Frazier the courtesy of mentioning her name.