Black Christians: Long Skirts Come Up Just Like Short Ones Do (A Spiritual Meditation)

By Jacqueline SamarooMay 25th, 2021No Comments 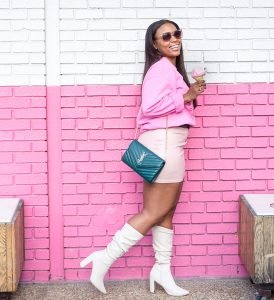 Photo by Tahiti Spears on Unsplash

Black Christians: Long Skirts Come Up Just Like Short Ones Do

Generally, I listen to The Love Hour podcast with Melissa and Kevin Fredericks every week on my way home from work. But I’ve been in the house for going on two weeks now, thanks to ya girl ‘Rona. And without the commute, my podcast-listening has been lagging. But the other day, I found myself doing something strange and uncomfortable: cooking. So I turned on the podcast to pass the time and distract myself.

While the two usually invite relationship/sex experts to provide professional insight on the topics they discuss, this time they decided to take things light and easy with a question and answer session with their Patreon supporters. Now, for those who are unfamiliar, Kevin and Melissa are Christians, Kevin got his start doing comedy in churches. And like a lot of Black folk who were raised in the church, they received a lot of conservative and sometimes suppressive views on life. So one of the Patreon users asked Kevin and Melissa how they handle criticism from people who feel that way.

“How do you guys manage unnecessary critic, comments or judgment from the super traditional Christians who view your progressive work as too secular?”

Essentially, they said they don’t pay too much attention to it. In fact they admitted that there are times when they listen to themselves and are surprised by the ways in which they evolved. But something Melissa said struck me.

“Honestly, I feel bad for them. And I don’t know if that’s an appropriate thing to say. But I do because I posted a picture the other day from when we were in high school and I had that outfit on and I’m literally thinking to myself why was I 21-years-old thinking that what I wanted to be was a church mother? Give me the longest—down to my ankles… 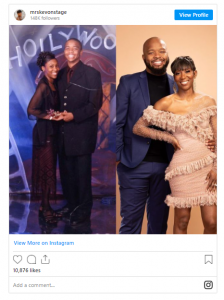 … And thinking that what I wore was a reflection of my relationship with Christ. It took a long time to recognize that that is something that is so personal. That’s why I believe the Bible says, ‘Man looks on the outward and God looks at the heart.’ Because we get so caught up in do you fit the part that I believe. And all I’m saying is, you can’t tell that by looking at me.”

The whole conversation triggered a memory.

In seventh grade, our school arranged for some professional photographers to come and take our picture. Unlike regular school pictures, with these you could pose with friends, they were full body, etc. And ya girl was geeked. I wore a gray, cap-sleeved shirt with the brand lei written in graffiti like font across the front, some low top Nike Air Force One’s with the baby blue swish, and a jean mini skirt from Old Navy. And baby when I say mini, I mean mini.

To the untrained eye, my middle school body and the one I walk around in now aren’t all that different. I weigh about the same but the thickness is situated differently. I could never pull it off today but in seventh grade, my thighs didn’t have the same swell of a woman in her thirties, so I could pull it off, but just barely. I had to sit and move just right or risk exposing my draws to my immature and gossipy peers.

I choose to take the picture with my good friend at the time, Adrienne*. Adrienne was like me in many ways. Black, witty, smart, funny, Christian. And I admired all of those things about her. But there were more than a few occasions when I’d realize we weren’t the same type of Christian.

We decided to take our picture together. On that day, Adrienne also wore a t-shirt and a jean skirt. But hers was much longer than mine. Much longer. I didn’t notice it until we began to pose for the picture. In my little mini skirt, I maneuvered my way down to the floor carefully to avoid any undue exposure. And Adrienne in her longer skirt, just plopped down on the floor. We both folded our legs to the side, leaned on our arms and smiled.

To get up, I had to clamp my legs shut, roll over onto my knees and then stand up from there. In the midst of this process, I must have said something about how I needed to be careful. And that’s when Adrienne said, “That’s because your skirt’s too short.”

She said the words flippantly and without further commentary but they clearly left an impression as I’m writing about them nearly twenty years later.

Adrienne and I both grew up in the church, different churches but we each knew the rules. Modesty was important and at the time, we believed like Melissa did that—that it was a direct reflection of your relationship with God. And if my Christian friend thought my skirt was too short, I assumed that she thought it somehow spoke to my walk with God. That bothered me.

So much so that when I got home that day, I told my grandmother about the skirt and the comment. In seventh grade, I wasn’t able to articulate the sadness or judgement I felt. But with my grandmother, I didn’t have to. As a woman who’d lived a full life, she knew what it was to have her morality called into question with every choice she made. And in a moment where my grandmother could have compounded my feelings of guilt and uncertainty, she poured into me with a life lesson I’ll never forget.

“Long skirts come up just like short ones do.”

The words are few but the sentiment is profound. Your clothing says very little about your character and absolutely nothing about your relationship with God.

Later in The Love Hour, Kevin confirmed what my grandmother told me as a seventh grader.

“There was girls with full-length jean skirts on getting smashed at church, so…”

After the podcast ended, I wondered why do we do this to ourselves, attempt to qualify a person’s connectedness to God through trivial, fleeting, nonconsequential things? And even more importantly, why do we fall for it?

After a bit of reflection, God and I came up with this. So much of religion was designed with the need to control people. Some of these mandates were meant to keep order in uncivilized societies and other times these mandates had more nefarious intentions. They were meant to suppress certain people. If I always have you jumping through hoops trying to prove your salvation, there’s little time for you to think for yourself, question authority, and challenge the status quo.

And we fall for these tactics because despite being raised in the church and following all of the rules, we don’t grasp how much God loves us. If we did, we would understand that God is not like us. He doesn’t move and think like we do. The very rules we think qualify us worthy of God’s love often mean nothing to Him. God’s love for us just is. There’s a lot of healing and spiritual freedom in embracing that reality and wearing your mini skirts with no shame.

Have you had similar experiences? What are your thoughts on clothes and spiritual freedom?