Black Women Relationships: Who Was Your First Crush?

By Jacqueline SamarooMay 17th, 2021No Comments 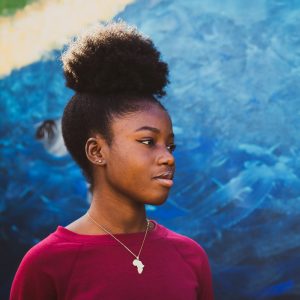 Photo by Suad Kamardeen on Unsplash

Black Women Relationships: Who Was Your First Crush?

At the recommendation of a few Twitter users who weren’t even talking to me, I decided to read Farrah Rochon’s The Boyfriend Project.

It’s a book about Samiah Brooks, one of the few Black women in the tech field, who meets a man at work just as she’s sworn off dating to focus on herself.

The book lived up to the hype.

It made me feel gushy. And at one point, putting the book down after a particularly lovely moment, I thought:

Shortly after that, I stumbled upon a post from Keke Palmer where she shared the story of her first crush, a summer camp counselor named Frankie.

Reading her story, I got that same giddy feeling, which made me want to ask a handful of Black women to share their first crush stories.

I was in second grade, when I first “met” Alex Harris. I use the word met loosely. Because we were never formally introduced. He was a fourth grader who volunteered to assist with our gym class one day. He and his friend who I never saw deigned to play dodgeball with kids two years younger than themselves. As you know, two years in a elementary schooler’s life is huge. Like, would I have been associating with kindergarteners as a second grader? Not if I didn’t have to. So I took his willingness to be around us as a sign of good character.

Alex was the color of desert sand, low low cut, thick black hair, and eyes that suggested maybe he was Blasian. He was fine, fine. But more than anything, I was enamored with his smile and the joy he seemed to exude just running around playing dodgeball.

As a kid, I was generally down for physical activity and the fun games we played in gym class. (Ya girl was a beast at the President’s Physical Fitness Challenge.) But this day, I was not giving my best… at all. I had no problems being forced out by the sting of that red, plastic ball. That way, I could stand on the sidelines and focus on watching Alex Harris, who seemed to be moving in slow motion up and down the floor.

I can remember this day clearly because I knew the game had been changed. I don’t know what I imagined would happen between Alex and I…especially considering he didn’t even know my name. But as I would come to learn is the best part of having a crush is how it makes you feel. I can’t tell you how many hours of my young life I spent fantasizing about Alex. Wondering what he was doing, what he was actually like as a person, spying on him in the hallway as our classes, organized in two boy, girl lines, passed one another in the hallway.

I told everybody about Alex Harris. My friends, my sister, my mom, my grandmother. Anyone who would listen because the feeling of having a crush on a boy who didn’t know I existed was just too big, too gushing, too tingly and frothy to keep to myself.

My mom was happy for me and wanted to know all about Alex Harris. My grandmother told me to focus on my books. And my friends playfully taunted me with the knowledge.

I’ll never forget at a friend’s birthday party, we were eating pizza and watching Clueless, when I seemed to be starring off in the distance imagining Alex and I in the same scenario as Cher and Christian—before we found out homeboy was gay.

My friend Sasha must have noticed that I was distracted. She whipped her head around, chin length-dookie- braids flying across her face to call me out in front of the whole room.

“Veronica! Are you thinking about Alex?!”

All I could do was smile as the whole room laughed at my expense.

Typically, my friends laughing at me would have made me uncomfortable, defensive even. But Sasha had called Alex’s name. And when you don’t have access to someone, the mere invocation of their name makes you feel bubbly inside.

My friend Erin, a shorter than average wavy-haired white girl, made me wave to Alex one day in the hallway. To my delight he returned the greeting, truly befuddled but kind.

Around Valentine’s Day, our school launched a fundraiser for who knows what. But in order to raise money, they allowed students to send one another “candy grams” for 10¢

All you had to do was pay your money, write a message and tell the organizer, usually a student volunteer, the name and class of the recipient. Of course thanks to my sleuthing, I knew all of that. And I wish I could tell you differently, but I candy-grammed the hell out of that boy—anonymously of course.

In my adulthood, I know that to be harassment. But to a second grader, I was getting just close enough to my crush without being exposed and letting him know that there was someone always watching.

I asked some other Black women about their first crushes. See what they had to say below.

Whitney: My first crush was Jeffery Venerable when both were in the 2nd grade. He was cute, popular and always had the latest Js LOL (so Midwestern). Living in the same neighborhood as him added to my interest. I don’t recall him being funny or especially kind though.

[I never told him how I felt] but I was exposed. I can’t remember if it was by a friend or my brother. I know he knew that I liked him because one night he and his friend knocked on my bedroom window and then ran. [After that his family moved away.]

Zarifa: My first crush was a childhood friend of mine at the time. She doesn’t even know that I had a little crush on her. We’re more like sisters now but back in the day, I was feeling the same sex. Nothing really happened because when you’re a little kid, you don’t know what to do with those feelings.

I did grow up in the church. I’m Baptist. I [felt] it was wrong but I didn’t know what it was that was wrong. There were people in my family who identified as homosexuals. But back in the eighties and nineties, you really didn’t talk about that. So I kind of pushed my feelings deep down inside of me. To this day, she doesn’t know.

Vanessa: My first crush was a little, white boy named Mark Glass and we were in the same first grade class together. What I liked about him was he was just a very cute little boy. He laughed at all my jokes so I think that’s why I liked him. He was a good person to be around at that time. He had really good energy. He was a little shy which is the opposite of who I was and am so maybe that was something that attracted to him. Maybe I felt he was a mysterious little boy.

I never really expressed my interest to him but in first grade, we would play house and there was this guy Aaron who always wanted to be the dad and me be the mom and Mark be our son. And I’d be like, ‘Let’s have Mark be the dad this time.’ But Aaron was not shy and was very extroverted so he’d be like, ‘No, I’m the dad.’ Mark never got to play my husband or the day in that scenario. So, I never got to express it outside of trying to make him be my play husband.

I think Mark just made me feel—I don’t want to say important—but there was a situation on the playground and all of the kids wrote cards to me and his card was just so nice. He had the nicest picture. He was saying he missed me. I mean all the kids did but maybe I just put extra weight on his card because I liked him. He made me feel kind of important. He listened very well, probably because he didn’t talk as much as I did.

And I later found out, during high school, that a lot of people had a crush on him so it was something he was doing right.

Gabrielle: My first crush I had on someone was when Usher came out with My Way and Ginuwine. Those were some of my first crushes. That was the first time that I had crush on anybody. I went through a phase in my life where I did have a girlfriend…”a girlfriend” and it was just like for play. We were young, in middle school.

Usher and Ginuwine. I was like ‘Whew!’ I was hiding posters under my bed, getting Word Up!

There was a lot of fear around it because I knew that I was different and I did not have anyone to really express myself too. And I also grew up in a very Catholic, strong household. I came out at 13. I had heard conversations about gay people and so it was very difficult for me.

Feel free to share your first crush story below.