By Jacqueline SamarooJune 1st, 2021No Comments 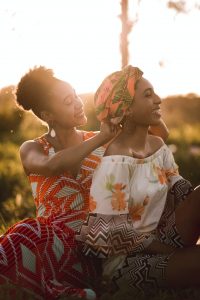 Photo by Junior REIS on Unsplash

When I learned that Robyn Crawford, Whitney Houston’s longtime friend and former business partner, was writing a book about their lives together, I didn’t think that she was disturbing Whitney’s “rest” as Black folk like to say. I didn’t even wonder why it took her seven years to tell this story. The only question I had was, was she going to tell the truth.

The Black folk on Twitter who got the book first proved that she was. So I ran to Barnes and Noble to discover the answer to the question I’d been asking since 2012. What killed Whitney Houston? Was it drugs, homophobia, Bobby Brown, society? By the time I reached the end of Crawford’s A Song For You, I think I found my answer. It wasn’t just one thing. But ultimately, I wouldn’t be surprised if she just got tired. Don’t get me wrong, I’m not suggesting that Whitney Houston intentionally took her life; but after getting just a tiny bit of insight into her life, through Robyn’s eyes over the course of 300 pages, I know I was tired.

At the end of the day, Whitney did what she was supposed to do. She shared the divine gift of her angelic voice with us for decades. She starred as a relatable and charming homegirl, pop star, first lady, and fairy godmother in some of our favorite films. And in the end, she provided us with a cautionary tale.

While we all thought she’d be around longer, I’d say she more than fulfilled her purpose.

In promotion for the book, Robyn told Wendy Williams that she wrote A Song For You to depict Whitney as a full human being. And as I told my sister earlier this week, she did dat. Learning of Whitney’s character and her story from so early in life, we can’t help but fall in love with her all over again–or for the first time. We root for her during her climb, rejoice in her triumphs, and are disappointed by her bad choices and behavior–just like every other person we “know.”

There are so many interesting stories, behind the scenes history that I learned. And some things that shook me in both beautiful and devastating ways. I want to highlight some of them because they speak not only to Whitney’s life but some of ours as well.

At the end of the day, Black women take care of Black women. And that’s what Robyn was for Whitney. Reading her story, it’s clear that despite the legion of people who surrounded her, they weren’t always there to uplift and support her. But Robyn was. From the moment they met, Robyn saw that this was someone who needed nurturing and thank God she gave that to her. God put those two in each other’s lives. If Robyn hadn’t been through from the beginning, there’s a good chance that we might not have ever known Whitney Houston the way we did.

Religion with no morality

From my own familial experiences, I’ve known not to put too much stock and faith in people who quote scripture. I want to see that you’re living right. It makes no sense to know God’s teachings and claim to be a Christian but nothing about your behavior is Christ-like. And I want to be clear, I’m not talking about Whitney in this situation. The whole novel really illuminated the impact a childhood can have on a person. Both Whitney and Robyn grew up in dysfunctional households. Both of them used drugs. But one of the major reasons Robyn was able to come out of that lifestyle and is still here today is because she had at least one person, her mother, looking out for her. She was nourished as a child–and quite frankly, actually raised. She could always tap back into that. In the end, it made all the difference.

Without saying too much, I do want to note that Whitney made very strategic choices about her life in order to achieve what she wanted in her career. She understood that certain things couldn’t be a part of her life if she planned on achieving the dreams she had for herself. Sadly, the things she forced out of her life and the things she clung to were not for the best.

In speaking about Aaliyah, Amanda Seales said that she was born into a family of sharks. For one reason or another, that phrase has replayed itself over and over again in my mind. I don’t know if it was true for Aaliyah. But after reading Robyn’s book, it certainly was the case for Whitney Houston. There were so few people invested in her personhood. And those people were ousted by those who wanted to leech off of her.

Eartha Kitt once said, “A man has always wanted to lay me down but he never wanted to pick me up.” There is a commonality among famous women–particularly Black women–and the men who come into their lives, sucking them dry. I won’t say too much because I want to keep this spoiler-free. But while Bobby Brown was a tyrant in Whitney’s life, he was far from the only man who belittled her.

Bobby Brown said that if Robyn had been able to stay around, Whitney would still be here. And it’s true. But then again, if she had who knows what would have happened to her. There were all types of tabloid news about what the Houston family wanted to do to her physically. But spiritually, who knows how she would have survived watching her friend be used and abused over and over again. And after being with Whitney since she was a teenager, she deserved to relinquish her position as guardian. She deserved a life of her own. I’m so glad that she took the time to find it. Not only for herself, her partner and her children; but even for us Whitney’s fans. If she hadn’t, we would have never gotten this story.