By Jacqueline SamarooJune 15th, 2021No Comments 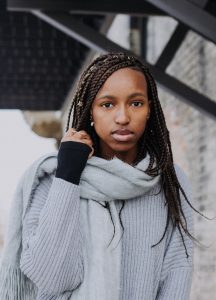 Photo by Joanna Nix-Walkup on Unsplash

My friend Black Kait sends me a text and it’s a picture of a man she’d found on Bumble. And she’s like,

‘Oh, I think that he would be a good match for you.’

She saw his activities, his views on drinking, smoking, etc.

And I was like, “Ehh…” I was looking at the picture and reading his description and I was like, ‘Alright.’ It said he was Jamaican so I was like, [tire screech.] But I thought, we’ll see.

NSNC: Why did you make that sound when you said he’s Jamaican?

Because Caribbean men—well, I can only speak about what I’ve seen as far as Jamaican history. And it’s not that great when it comes to relationships with women. So when I saw that he was Jamaican I was like aiii. But he was cute and had a job. If he’s interested, quarantine is preventing us from being able to go anywhere so I was like I can see if I like his conversation, if he has nice chat.

Black Kait asked me, ‘Can I give him your Instagram?’ And I was like, ‘Sure.’ But beforehand, I tried to do reverse image searches, Google his name so I could get proper intel but nothing showed up. So, after she gave him my Instagram name, he DMed me the next day.

He says, ‘Your homegirl gave me your IG off of Bumble.” I told him, ‘We tried finding your social media but it didn’t work.’ I told him about my tactics. His name + Jamaican + trainer + New York and nothing came up.

NSNC: Send me a picture of him.

Ok. I’ll screenshot. So, I was asking him what he was doing to keep busy during quarantine. He said, ‘I do IT so I’m comfortable being at home on the computer all the time. It’s not a huge adjustment.” Then he asked me how I’m staying productive. I let him know.

Then I asked him—because I feel like it makes a bit of a difference. Where are you or your people from in Jamaica? He said, ‘I was born and raised in St. Andrews.’ I was like Oh Lord. The culture got to him early. If you’re born there—men, typically have different mindsets.

He asked what my background was and I told him my maternal grandparents are Jamaican, my dad’s people are Southern Black and I was born in Indianapolis.

He asked me about sports and then he asked where I live now.

And he goes, ‘Since when have you lived in Harlem?’

And he told me he’d lived in Harlem for the past five years and started making jokes about us running into each other at Corner Social, which I’ve only been there twice. So highly unlikely.

I thought oh a little witty. That’s so nice.

Then I told him where I lived and he said, ‘Oh you’re on a lit block.’

He asked me if I had any kids and my age. I realized I hadn’t told him my name so I gave him that. I told him I didn’t have any kids and I was thirty. I asked if he had any children.

He said, ‘No offspring.’

And I was like, ‘Whew! I haven’t met many Jamaican men in their thirties with no children. Inspiring.’

He responds, ‘Lol! Inspiring she said.’

I said, ‘I was going to make a more blunt joke but I decided I don’t really know you. I was going to say a 34-year-old Jamaican man with no kids: a unicorn.’

He said, ‘Why was I supposed to be offended by that.’

I thought okay he can deal with a little jab. I can come with all the wit and the jokes. Then, this is when it got sour.

He says, ‘You should know that I’m not much of a keyboard warrior so do you feel like breaking the rules and linking up sometime soon?’

NSNC: What was the date he asked this?

This was March 22nd.

Yes, in the midst of the pandemic. At this point, I’d already been home for two weeks.

So I had a pause because there’s no way he could know this but I am literally the person that stares out of my window counting the groups of people outside and how many people are in said groups. There’s no way that I’m about to be a hypocrite and bring my Black ass outside.

I’m not going outside. Plus, we also knew so much less about corona than what we know now. I was not trying to be outside for any reason.

After he said that, I was like…okay let me just… my first thought was to say, ‘Okay, you don’t follow rules.

What don’t you understand?’

Instead, I said, ‘I feel like three of my coworker friends have had the virus or have the virus and although I’m not experiencing any symptoms, I’m trying to distance myself from everyone just in case. I could give it to anyone who comes in contact with the same area that I’ve been in.

NSNC: And where was he planning on meeting you?

Girl! That’s what I’m saying. If you’re saying that we can only be in people’s home that we’re not supposed to be going anywhere else, then where did you expect me to meet you, at your house?

NSNC: A strange man from the internet…

But I said, ‘Maybe in a couple weeks we can meet at a park and we can have a conversation six feet away from each other.’

He was like, ‘Oh a couple of weeks L…Okay I guess’ [with a shrug emoji.]

He responded, ‘I’m one of those, don’t go outside because it’s dangerous but still live your life in the safety of your home.’

Oh so you were going to try to come to my home? Which was not happening. Or have me come to your home which would also not happen.

NSNC: Not my Caucasian home.

NSNC: Because if you’ll do it for me…

He says, ‘But sure a couple of weeks [dry smiley face.] Keep the hand sanitizer and Lysol on deck.’

And that’s it and that’s all because what were you expecting? That was a red flag for me. It just shows that you don’t take things seriously in my opinion. You’re very selfish and inconsiderate and you don’t understand the impact. I really thought through all those things when I saw the message. There are just so many things I’ve experienced in life that show me that these are red flags. Even how you’re reacting to me saying “two weeks.” I don’t like that energy so it’s not a good match.

NSNC: The gag is you gon’ have to wait longer than two weeks for a lot of things.

Thank you! And I literally get so upset when I see people gathering with people that they don’t live with. I don’t even want to waste my time having a textual conversation because you just don’t get it. And you live in New York so we’ve been given a lot more information than the rest of the country because we’re much further along. So why aren’t you understanding what they’re saying? You can go to the comfort of people’s homes? What?

NSNC: No that’s not what they said.

NSNC: And for your sake, how many homes has he been to?

Okay?! Because first I thought he wanted to meet up at a park and we hang out. Because I feel like that’s appropriate quarantine type date. But then he was talking about other people’s homes…whoever said that?

I said to myself this reminds me why I got off the app. We can’t have a conversation for literally a few hours and you talkin’ bout let’s go on a date to each other’s house. Do I look like Bo Bo The Fool? You could be a murderer. What a story to tell. Vanessa left her house during quarantine to meet some man she didn’t know and died. Not me.

NSNC: No ma’am…let me see if I can see his picture…Oh he’s really cute…I be lookin’ at my own friends side-eyed so I really can’t. On his bio he writes, ‘Let’s connect unless your name is Rona, Corona, or Ronnie, then no, let’s not.”

You put that in your bio but you didn’t know if I had corona or not.

NSNC: But who has corona? You don’t know.

But he ain’t even ask me.

NSNC: Right the fact that you said so many of your coworkers had it and he didn’t even care. Wow

I’m still tryna see what that thang look like.

NSNC: So you be taking unnecessary risks. Do you use protection?

…connection. Sure. But that is NEV—ER been me. Not to the point where I would do that? Like, who doesn’t want connection. But I’m not about to go outside and endanger myself and others for compassion.

NSNC: Without even knowing if you would enjoy the time.

Not even knowing if I would get compassion, shit.

NSNC: Well…What did Black Kait say when you told her?

“He is exhibiting fuckboy behavior way too early on. Let’s raise all the red flags and proceed with caution. How irresponsible…and thirsty.”

Let us know – did you have a quarantine bae? How did it turn out?