By Jacqueline SamarooJune 24th, 2021No Comments 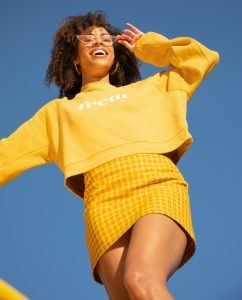 Photo by Team Fredi on Unsplash

New York City is a cultural mecca, known for its cuisine, artistry, and fashion week. But there are other runways. In Indianapolis, Indiana, there are two seminal events that cater to the Black community. One in the summer, the Indiana Black Expo and another in the fall, the Circle City Classic. While these events might have waned in popularity over the years, in the early 2000s, the concrete halls of the RCA Dome, punctuated by the smell of fried fish and fresh perms, also served as a catwalk of sorts.

There were Timberlands of all colors, skintight denim catsuits, hair that cascaded down from high ponytails like frozen black waterfalls, and Nascar jackets.

To this day, I still can’t understand why it is that Black folk gravitated towards this look. After all, when it comes to the sports in which we partake, race car driving is not at the top of the list. Then again, in the early 2000s, comically oversized was in; and historically, Black folk across the globe have loved anything brightly colored. These jackets were essentially billboards for some of our favorite brands: M&Ms, Disney, and Looney Tunes. While the boys preferred Bugs Bunny, Marvin the Martian, or the Tasmanian Devil, Black girls were all about Tweety Bird.

Really, Tweety Bird’s presence on the racer jacket was the continuation of a love affair between Black girls and Tweety Bird that began long ago. Tweety Bird was introduced as a character in 1941. By the sixties, my mother had a childhood friend who went by the nickname Tweety. It followed her into adulthood.

And it makes sense, Tweety was a play on the word “sweetie” and people had been using that term of endearment to refer to their little girls for ages. My cousin shared that she bestowed the nickname on her younger sister when she was born because she had a big head, big eyes and a few sparse hairs like Tweety.

In the nineties,perhaps after seeing how Black entrepreneurs were selling t-shirts of cartoon characters with Black skin, Warner Bros. released clothing merchandise featuring their beloved Looney Tune characters in urban attire. Seeing a tiny Tweety in baggy jeans and a backwards cap only endeared him to us even more.

As a child, I only liked a select few cartoons and the Looney Tunes franchise wasn’t in my top 5. Still, I was elated to wear the clear plastic-banded Tweety Bird watch my mom bought me for Christmas one year. It was the starter version of the leather-strapped Tweety watches fully grown Black women were wearing at the time.

Over the years, I’ve noticed that Black women all over the world have a thing for Tweety.

And I’ve wondered why. What is it about this male bird that had Black girls so in love? We can start with the obvious. Tweety is cute AF. With those long lashes and big ole head, he does look like a baby, an adorable one.

It’s not lost on me that in a world that has presumed Black girls are rough around the edges, fast-tailed, and attitudinal, we might like to be associated with something sweet and adorable every once in a while.

If you’ve ever watched Tweety you know that he’s more than what he appears. He’s small but mighty. His life is constantly being threatened by some cat–but despite his best efforts, he’s never able to devour Tweety.

It was Zora Neale Hurston who accurately described Black women as the mules of the world, in terms of how we’re treated in society. On this planet, we’re the least of these. Around every corner is some man, some company, some structure, some force trying to devour us. But just like Tweety, we always have something for dat ass.

If you watch Tweety and Black women alike, there are more than a few times when it appears that we won’t make it. But inevitably, there’s always some scheme, trick or maneuver we employ to get out of the most dangerous and precarious situations. Sometimes we may lose all of our feathers trying to get out, but more often than not, we escape still looking cute AF. Black women are the definition of victorious just like Tweety. And game recognize game.

These days, you’ll be more hard-pressed to find Black girls identifying with Tweety. Over time, Tweety, the small but mighty, victorious little bird was used against us. Black girls who loved Tweety were called hood, ratchet, or ghetto. Black folk, men and women alike, used the association with Tweety to attack our Achilles’ heel: our hair. Black women who were growing out their hair or dealing with the negative effects of too many relaxers, struggled to gather their hair into ponytails at the top of their head. And Black people, known for our sharp tongues and quick wit, used it as an insult. Having a Tweety bird ponytail meant your hair was short, thin and broken. And while it worked for Tweety, the look wasn’t cute on actual Black girls.

Not to mention the fact that calling a woman a bird is not exactly a compliment.

Times have changed. Looney Tunes franchise isn’t as hot as it used to be. There are newer, more culturally relevant cartoons, including ones that feature actual Black girls. But before then, there was Tweety.

Who was your favorite cartoon character growing up? Was it Tweety Bird? Let us know!