A Black Childhood Memory: An Indiana Black Girl’s Interaction With The Klan

By Jacqueline SamarooJuly 15th, 2021No Comments 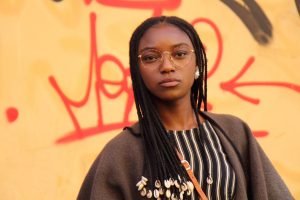 Photo by Etty Fidele on Unsplash

An Indiana Black Girl’s Interaction With The Klan

I’ve been thinking about the Klan a lot lately. One, because my husband had us watching some Vice documentary on “the new Klan” which purported to be different from the old one. As you might assume, it was some bullshit. They still believed they were the superior race, still burned crosses, still wore noose insignia, and despite claims that they were no longer a hateful or violent group, there were violent attacks carried out in their name.

Childhood Memories of the Klan

Then, last week an old friend reached out to me about a work opportunity. In the email she sent, she tried to jog my memory about who she was. I didn’t need the reminder. I have many childhood memories that included her. We watched Power Rangers at her house before school in the morning. My sister and I ruined the myth of Santa Claus for her. I lost my Mickey Mouse ring playing in the leaves in her front yard. But more than anything, the thing I’ll never forget about her was a story she told us about a recurrent dream she had growing up.

This old friend is biracial, with a Black father and a White mother. She said in her dream, the Klan comes to her house, immediately kills her father, takes her mother away, and then asks her to choose which side she’s on.

We were kids when she told us about that dream but I’ll never forget it. Partially because I had also had nightmares about the Klan. But mostly because it was so tragic how our brains processed our deepest fears as children, even as we slept.

This week, I was telling another friend about my childhood friend’s dream and she asked, “What did she know about the Klan as a kid?” I told her, “We grew up in Indiana.”

I don’t know how she personally knew about them but their legacy in Indiana wasn’t particularly hidden. After World War I, in the early 1920s, Indiana boasted the largest Klan membership in the nation, including several politicians and law enforcement officials. Seeing a Confederate flag in someone’s front lawn or on the license plate of their pickup truck was not uncommon. When our predominately Black sports teams played another team from the surrounding, Whiter cities in the state, like Muncie or Richmond, there were stories of nooses hanging from trees. The Klan is a thing in Indiana.

Personally, I learned about them from the Eyes on the Prize documentaries my parents showed us, perhaps a little too early. My one dream about the Klan started after that required viewing. And while I couldn’t understand why my parents made us watch that series, it ultimately prepared us for our own personal encounter with some descendants of the Klan in the mid-nineties.

A Terrifying Black Childhood Memory of the Klan

One summer, my family and I were driving back to Indianapolis after visiting our family in Fort Wayne, Indiana. There were stretches in my childhood, where I can remember driving to Fort Wayne virtually every weekend. But this trip was drastically different than any other we’d taken. Our parents had stopped at McDonald’s before the two-hour trip home. Just after I had finished my food and was examining the Johnny Bravo figurine that came with the Happy Meal, an Oldsmobile Cutlass type of car stripped of its paint pulled up alongside us. Their car was spray-painted with the three Ks and swastika symbols. There was a Confederate Flag hanging from the rearview mirror that the driver kept grabbing and shaking as he leaned out of the car to scream in our direction.

I remember looking back and forth from their car to my parents in the front seats.

Without saying a word to one another, the two of them, both born in the fifties, slipped into some unstated but understood protocol. They were silent, staring straight ahead with blank expressions, clearly aware but not acknowledging the taunts and screams next to us.

The two White men in the Oldsmobile rode parallel to our car for probably a minute before they sped up and away from us. After I was sure that they were gone, I remember looking down at the White Johnny Bravo toy in my hand and throwing it on the ground, no longer interested.

For as much as my parents talked and dissected most life events, I don’t remember us having a conversation about this moment until we asked them about it decades later when my sister and I were both adults.

My dad, the most argumentative person I know said that his only goal was to get us away from them safely. And that was pretty much it. There wasn’t much discussion about the incident as adults either.

In fact, before I started writing this, I had to call my sister to make sure it actually happened, that I hadn’t made this whole thing up. Her memory matches mine.

The Impact of That Childhood Memory

Last weekend, my sister-in-law came to visit from Belgium. On Facebook, she wrote about being nervous to come to New York City, where my sister, myself, and my husband live today. She made sure to specify that it wasn’t the good nervous either.

Later, she told my husband and me that she was nervous to come here as a Black woman, not knowing how she would be received. She wondered if she would encounter racism here. And the prospect of being confronted with it made her nervous.

Her concern brought that Klan memory to the forefront of my mind. And while my husband assured her that it was unlikely that she’d run into any blatant racism in New York City, I shared the cliff notes version of that story with her. I thought I knew the gravity of that moment as I was living it as a child. But in the days since the retelling of that story, I ache for that version of myself and the hatred I was exposed to in that moment. Hatred so strong and so close that it made me regard Happy Meal toys differently.

What are your early memories of race relations? How have they shaped you?