#LogOffSis: A Critique of Our Attachment to Social Media

By Jacqueline SamarooAugust 31st, 2021No Comments 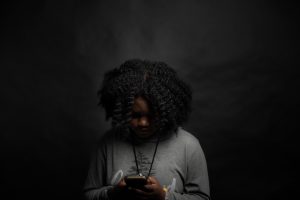 Photo by Chad Madden on Unsplash

A Critique of Our Attachment to Social Media

Before I get into this, I want you to know I do recognize the irony of you reading this message of #LogOffSis from your cell phone or computer screen. But truth be told, the digital space is the most effective, fastest way to reach people. And of course, I want you to read my shit and then log off…as you see fit.

This phrase came from my dear friend Whitney Williams-Garrison. The two of us watched as a C-list celebrity with a significant and growing Instagram following documented herself spiraling out of control. From the outside looking in, she recorded herself experiencing an emotional breaking point. There were tears. As a professional crier, I know there is nothing wrong with crying. It’s healthy and I’d even argue that it should be normalized. But shedding them for hundreds of thousands of people on the internet is not all that helpful. Not only do you run the risk that your audience will misinterpret the nature of your tears, processing your emotions in real time—and on the internet can be a dangerous game. 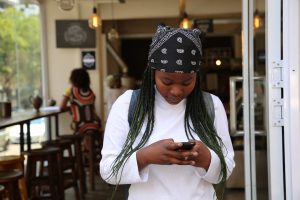 I don’t write about that celebrity with disgust or with the attempt to shame her because I almost went there. Months later, I recorded an 11-minute video of myself snotting and crying about getting recognized after not feeling appreciated for far too long. I sent the video to my council and asked them if I should put it on the internet. They told me that I should, that the message could help some people. And it really might have. But after sitting on the video for two days, I realized I looked crazy as hell. (I just tried to re-watch that video now and I still can’t do it.) That’s the thing about emotions, they’re very real in the moment; but more often than not, you look back at them and realize you were overreacting or you no longer feel that way. The internet can be a cruel place and it’s easy for folks to take a moment of vulnerability and use it against you.

And if we’re being honest with ourselves, there are times when we’ve been those people. We’ve all witnessed folks using social media as a diary. I cringe when I think about people talking about their failing relationships, annoying baby daddies and even their sex lives on Facebook or the gram. And then have the nerve to wonder why people are always inquiring about their business…because you put it out there for us to consume as content. And contrary to what these reality tv stars and influencers would have you believe, some aspects of our lives shouldn’t be commercialized. Some people can share and walk away from the opinions, unscathed by negative feedback. But many of us cannot. And for good reason, it’s unnatural for us to be exposed to what so many people think of us and the things we do. It can inflate the ego or even worse, damage it.

I’m saying this not only because I’ve observed it in other people, but also in myself. I posted a video on my personal Instagram page, hours before I started writing this piece. If I told you the number of times I’d picked up my phone, refreshing my IG feed to reveal new likes and comments, I’d be ashamed, mostly because there weren’t that many to be found.

There have been entire studies conducted on the chemical shifts that take place in our brain when we see those Instagram hearts pop up. There is a correlation between the time we spend on social media and feelings of depression, loneliness, anxiety, and isolation. Melissa G. Hunt, the author of this study told Forbes, “Some of the existing literature on social media suggests there’s an enormous amount of social comparison that happens. When you look at other people’s lives, particularly on Instagram, it’s easy to conclude that everyone else’s life is cooler or better than yours.”

Melissa ain’t have to tell you that for us to know it’s true. We’ve experienced it firsthand. Someone dresses and looks more put together than you. They’re taking more trips. They have more friends than you do. They have a romantic relationship or a relationship that seems to be without flaw. Her hair is poppin’, her makeup is flawless. Her booty is bigger. She has more followers, more likes, more. than. me. The perception can make you feel a way.

One thing working in media has taught me is that you don’t even have to write to tell a story. And a lot of the ones we see on social media or in the digital space, versus the ones that are happening in real life, are complete and utter fiction. But it’s hard to remember that when you’re sitting on the toilet taking a sh*t or laying in your bed lonely and bored while you scroll past what appears to be a real-life version of your peers living “their best lives.” We forget that this is curated, produced content. Hell, half of the time we don’t consider the cumbersome and distracting reality of holding a phone to document a moment that’s so amazing, we’re forgoing actually living in it.

If Theodore Roosevelt said “Comparison is the Thief of Joy,” when all we had was word of mouth, radios, newspapers and blurry black and white photographs, what would he say about carrying around a handheld device, every waking hour of the day, that constantly informs you of the whereabouts of other people—from your neighborhood to across the world? It can be too much. 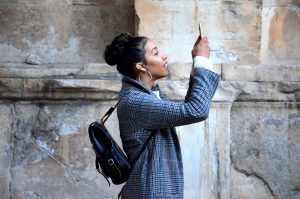 All that being said, I’d never tell anyone to get rid of social media—or even that it does more harm than good. The laughter, inspiration, compassion, and information social media has brought to my life outweighs the foolishness and evil it can also expose us to. But we have to be wary of the way it’s affecting our lives offline. Even the study said that we don’t need to do away with it altogether, we just need to be more strategic about limiting our usage—for our relationships, our mental and physical health.

I know I’m addicted to my phone but I wasn’t aware of how bad it was until I moved in with my husband. (The realest thing about marriage is that it will expose all of our personal shit and quickly. Proceed with caution.) My husband would ask me why would I sit down to watch tv and immediately pull out my phone? He introduced me to this game “Crowd City” and then told me that for all the time I spent playing it, I could have learned a language. I rolled my eyes when he said it and I rolled my eyes again typing that sentence. But he was right. If he’s telling me something important, he wants to know that my phone is down before he speaks. And while it’s annoying, it’s helpful. In the few months that I’ve been married, I learned I’m not as good of a listener as I thought I was—with or without my phone, so I really don’t need the additional distraction.

A couple months ago, I decided to binge watch “Game of Thrones” so I could watch the final season with the rest of the world. It took weeks. And somewhere toward the end of that journey, I developed an eye strain. Between working on the computer all day for work, being on my phone in between, watching GOT at close range on my laptop in bed, and then getting on my phone to scroll afterward, my eyes were sick of me. And they let me know it. My eyes felt dry but one was leaking. I had to keep it closed in between activities and I had to put my damn phone down and close the laptop.

Honestly, it was embarrassing to know that I’d put my health, my vision—the sense I rely on the most—at risk to watch tv and be in people’s business. 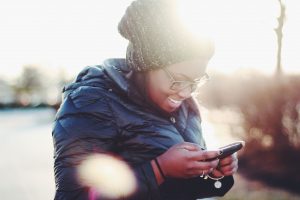 But I’m not the only one. Optometrists have found that because of increased screen time, there is more nearsightedness, eye strain and eye dryness among children. The other day, my sister watched me bending down to use my phone to told me to correct my posture because a study found that children are starting to develop “horns” or bone spurs at the back of their skulls from extended and excessive bending to look down at their cell phones. (There is some discrepancy about the cause—but we know the phones aren’t helping.) 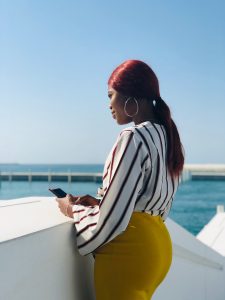 I’ve been thinking about this Log Off Sis for some time. And I feel now that it’s summer, this is the perfect time to drop this much-needed message. Close your laptop. Put your phone down…or away…and get up, get out and do something, at least for a little while. You may find it changes the game.

After the publication of this article, I found another Black woman used Log Off Sis in 2017. You can read her article on the same subject, here.