My Therapist Taught Me: Overextending Was My Trauma Response 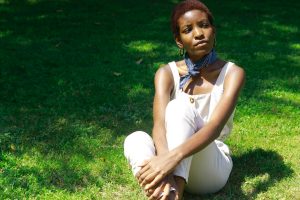 Photo by Jakayla Toney on Unsplash

My Therapist Taught Me: Overextending Was My Trauma Response

Tanya Jefferies put attending therapy on her vision board for the past eight years. But she never followed through. Eventually, circumstances caused her to finally prioritize her mental health. For the last story of #MyTherapistTaughtMe series, Tanya speaks about what she’s learned from her therapist and how it’s changed her perspective and behavior.

NSNC: What made you go and see a therapist?

Girl. It was a couple of things. One, the pandemic, being in the house by myself and isolated from everyone. I started therapy in August. So, we had been in the pandemic for like five months. There were also all the struggles I was having at work. And, just growth.

Throughout life, honestly, I leaned on you a lot. I feel like you help me understand a lot about what I go through emotionally. But it’s not a fair expectation for me to put that on my loved ones, to figure out what I need to do. I feel like I was trying to figure it all out on my own. But, it’s okay to reach out to someone for tools, especially since I was paying for insurance.

My family is always stressful so I couldn’t necessarily reach out to them. I had to find a tool for myself.

I reached out to three people. Only one person called me back and that’s my current therapist.

NSNC: What do you think it was that prevented you from attending therapy before now?

I was just overthinking. I’d think, ‘Do I want my therapist to be older than me? Do I care if my therapist is Black or not?’ Then, I felt like I could just manage. But you know Thanos (from Marvel’s Infinity Wars) and how he would make people disintegrate? Girl, that’s how I was feeling. I felt like a zombie, like part of myself was falling off.

Being geographically distant from everyone helped. I didn’t have someone else’s problem as an immediate concern. It was literally just me.

NSNC: What conclusions did you come to in terms of how you wanted your therapist to identify?

I definitely wanted a Black woman. When I was in anger management, I had this like creepy old white man. I just never felt comfortable enough to even be authentic with him or even tell him the truth. I was straight up in there lying. When I lie to people and they believe it, I don’t find them valuable.

One of the other stresses that I had was work. Being a Black woman at work was a unique experience. I didn’t need someone to try to make me feel like what I was experiencing wasn’t authentic or true.

These fake, liberal demons think things are better than what they are and they want you to affirm that in order for them to feel comfortable. I can’t be doing that.

One thing that absolutely was at the top of the list, for the therapist is someone who could understand my family dynamic. When I say what’s going on with my family, some white people and non-Black people act so surprised by it. It makes me feel judged and it’s not out of the norm. It’s not a spectacle. This is what my existence has been for a long time. I don’t want the shock to be a thing. I just want you to help me work through it because you’ve seen things that are similar.

It’s okay to reach out to someone for tools.

NSNC: What did your therapist tell you that shifted your perspective?

She told me that my overextension was a trauma response. She saw that I was continuously drained at work. I started therapy in August. September my brother passed away. Then my mom is doing crazy things all the time.

I started therapy because I have waves of guilt about being far away from [my nieces and nephews]. So what ends up happening is I end up moving often. I’ll move home or I’ll move somewhere else. I’m always thinking I need to be somewhere other than where I am.

She helped me feel better, telling me that’s not what I need to do.

They’ve been playing with me at work. And I didn’t understand why. I’ve been doing good work. I do all these things for people. I’ll even work longer, later, or harder. It’s not only to get recognition. It’s also because I actually care about the people.

She told me, because you were resource-deprived as a child that causes you to not want someone else to experience a lack of resources as well. Basically, you sacrifice yourself. And then on top of that, it makes you vulnerable to however that person responds to it.

Ever since she gave me that I be like fuck them people at work.

What I thought I needed to work on in therapy and what we actually talk about are two totally different things. I thought I needed to talk about all my relationship stuff and why I was dealing with people who were inconsistent and shitty. She made that very clear early. She said, ‘I’m not going to be sitting up here talking to you about relationships. We’re going to work on you and when you evolve, everyone that you deal with will change.’

And a layer onto that is your inner child. What really stood out to me in the first couple weeks of therapy was when she said, ‘Tell me all of the great things about yourself.’ When I tell you I hesitated…

Generally, I think I have a pretty good view of myself internally. But girl, I’m highly critical of myself. And I’m like why? I don’t know where it’s coming from. I think part of it is I’m judging myself off of external validation.

Another reason I started therapy was because I was anxious even leaving the house–and this was before the pandemic. I love being at home. But going out was becoming a problem for me. Even associating with other people. She told me I have an anxious avoidant attachment style. Basically, I go into a hole. You don’t get to choose your family. That’s one thing. But when I choose people who mistreat me…it’s almost like I self-punish.

But I’m grading myself on material I was never taught. You told me that I basically have to raise myself all over again and that’s what this process has been this past year.

One thing that’s helped though is that I’m a naturally introspective person. Sometimes therapy can be draining but it has been relieving as well. Because I have therapy every week, I don’t let shit get to me. I know that I have a time and space where I can talk about this. I deal with ruminating thoughts but I can let it go to rest when Wednesday comes around.

When you evolve, everyone that you deal with will change.

Boundaries are something I’ve always struggled with. So when my therapist made the point about overextension, I realized I do this personally and professionally. And when I started telling people no…they started losing their minds at work. A, because I’m a Black woman.

I have literally made a career out of helping other people do things. At this point, I’m like is my career my trauma response? I have a chemical reaction to finding joy in helping people. But I can’t do it at my own expense.

Because I’ve been so far away from my family, I’ve tried to make my coworkers my second family. And that has been my problem. I can’t do that no more. So I’m making myself whole within myself.