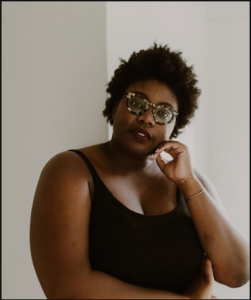 In 2020, Ashley Johnson, a photographer and all-around creative, quit her desk job after nine years. See what she said she’s discovered on the other side of the decision.

In school, I got mostly arts degrees. But fresh out of college, I decided to get a random temp job doing data entry. I graduated into this new world of behavioral health, specifically Medicaid. I was a credentialing coordinator. Basically, my job was to assure that all the clinicians who were delivering services by the state were credentialed.

Absolutely not a dream job for me. This was definitely a survival job. When you’re a creative, there’s no real plan. But I was like, ‘I gotta work and I gotta eat.’ so that’s where I ended up.

I was really looking for stability in my life. I had never really had stability. I just wanted something. It was another plot point on the road to figuring out what I wanted to do, who I wanted to be, and what was going to sustain me.

I’d had this job for nine years and about the third year in I started feeling discontent. I absolutely loved my coworkers. I worked around a bunch of Black women. They were just fun. But it’s disorganization that really throws me for a loop. I’m a really good problem solver and one of the reasons I excelled in the role was because the organization itself was one big problem. Still, it wasn’t because of the work. It’s always management. I did not enjoy leadership. It’s always about who you know, not because they’re competent.

Last year, I couldn’t even force myself to care about my work anymore. I just let things lapse, which is dangerous honestly. Because we were responsible for how clinicians get paid. Before, I would do anything to make sure people were getting paid and not being left behind. But in the end, I didn’t have the fortitude to do it. We really needed more employees and we weren’t being heard. I thought, ‘If y’all don’t care about how we’re being sustained then I don’t care.’

Our team was very dedicated. We would stay after hours, work on the weekends, which was hurting us because leadership thought, ‘You’re still getting it done.’

2020 really shifted the perspective of what actually matters to me. And work in and of itself, any type of labor–I just didn’t want to do any work, even my own work.

I was really looking for stability in my life.

Loneliness. I’ve always been a person who was like, ‘I’m working.’ I have my day job and my business. I’m working all day. I’m working on the weekends. And I think my body just stopped. It gave up. I stopped shooting. I started to feel anxiety in shooting. I’d never felt that before. I was so anxious to do the work, I would avoid it.

I just sat and listened to myself more. My life slowed down and so did my thoughts. I took stock of all of my stuff that was laying out in front of me and I said, ‘Here are the things that really matter.’ And also, I’m a little sad. I didn’t realize how sad I really was. I went to find the root of that sadness. It was a very low place. I thought what matters to me is not sitting at my desk for 7-8 hours every day, typing away at something or being beholden to mundane shit like spreadsheets.

2020 excavated me. My home was one big ass mirror. I just sat here on this couch every day and looked at myself. It was hard to look at. But slowly, I came back around.

When the opportunity to quit came around again, it was the easiest decision.

The state made a massive change with Medicaid. Counties didn’t want to be under our protection anymore. We went from 20 counties to 7. People started losing their jobs. We joined with another organization. I was being offered my job in the new world. I sat on it. I said, ‘I have a choice.’ I could say yes and move forward, do this work some more and stay in this group chat with all these white women. Or I could trust where I feel like I’m being called and go another way.

Before I declined it, I did a little bit of tarot. The cards said something along the lines of you’re standing on the edge of a decision and forging ahead in new paths. I also read my devotional. It said the same thing about trusting and believing.

Everybody was on one accord.

I declined it and I texted my supervisor and my group chat. I didn’t feel bad. I felt an overwhelming sense of calm.

Also, being a person who’s had to scrap my whole life, I wanted to know what not working feels like. It’s been eye-opening.

Before I was so beholden to stability and wanting to feel safe in income. I didn’t feel that anymore. I started to feel more fulfilled and very sure of another vision. I was getting some really cool jobs. I started to see the work of my own hands paying off. I was in good relationships with contractors. I didn’t trust how unwieldy creative work really was. But when I started doing my own work, I realized this has its own stability.

It was that coupled with a vision that I have. It’s not a money making vision, it’s just a vision. I think it can expand and be massive and good.

I’m very sure about what I want to build with my own hands.

I was just having a debate with myself about how we feel like we always have to impress white people–even with our output, especially with our output. We have to be employable.

I knew both of my great grandmothers. And one of them worked for a white family, doing their laundry. My family thought that was so impressive that she worked for this good family. I’m like this is still a Black woman working in a white person’s house. But they liked something about her being aligned with a good family.

When I look at the way my family thinks about work, the way people in my family treat people who don’t work– it’s a mentality that needs a little bit of rinsing out. I’m talking about the older folks. Our generation will quit on you, ok?!

We work so hard to be employable; when in reality, it’s not a place we want to be. And not because of the work, it’s white mediocrity.

What have you found on the other side of your resignation?

Oh my God, rest. Black people do not rest. I think about my grandmothers–women who didn’t rest. They were taking care of people, including a lot of people that they didn’t birth. I don’t think people realize just how traumatizing work can be to the body. I still have this Sunday night dread. ‘Like gottdamn, I gotta go to work on Monday.’ That’s a programmed response in my body.

Being out of work has taken a huge weight off of my nervous system. And the response has been to go to sleep. I used to feel guilty for naps. I didn’t like to nap. If I woke up and the sun was down, I would feel bad. If I laid in bed past a certain time, I would think I wasted my entire morning. And it’s like what if you just gave yourself the time that your body actually wants to sit? That’s what I’ve been doing, actually resting.

I found a type of rest my grandmas would have never fathomed. Because they worked up until the time they passed away. This is an ancestral rest.

My therapist always said, as I heal my family would heal. I didn’t know what that meant. But now, when I talk about my rest or what I deserve, I can see my family ingesting those things. Even if they just stop to consider it, that’s enough.

I’m sure eventually I’ll go back to–maybe not traditional work–but ramping up my effort. But right now, I don’t want to do nothing.

This is an ancestral rest.

Black Women and the Great Resignation

Advice for other Black women who are considering quitting.

Do it. Before I quit this job, I was thinking about it from a space of scarcity and lack. I was telling a friend, ‘I’m not going to be able to afford this. I’ve done the math and I won’t be able to have this anymore.’ And my friend said, ‘Ashley, that is a lie!’

I don’t like to tell people to quit because if your livelihood is dependent on something…But if you are called by something, especially now in this day and age, you will be caught. You will be caught by something. Even if it’s an opportunity that you don’t really want, it will teach you something.

We think we’re going to be evicted, we’re going to be outside. But you will be caught. It sounds crazy but a lot of times, the universe, God is waiting on you to trust in that power just enough for them to move you to that next level.

A lot of times I don’t internalize the good things that are happening in my life. My friend was like, when good things happen, write it down on a piece of paper and put it in a jar. So I started an omen jar: ‘Good things are happening.’ And I would look over and be like, ‘Damn, the jar is looking good.’ I am on the right path. I’m not going to fall. I’m going to be caught.

I would say just do it. I know it’s going to feel irrational. But irrational is good. Crazy is good. Spicing up your story, your plot is good.

And imagine what will happen if you just nap a little bit. It’s some shit that done came up since I went to sleep.