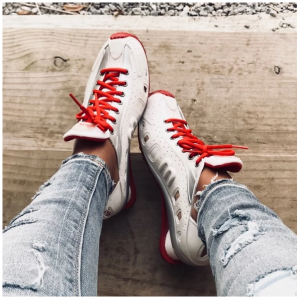 It was a hot July day in Indianapolis when I realized that the hold Melissa shoes had on Black girls was, perhaps, a little too strong.

I was enrolled in summer school gym and in order to receive credit for the course, you had to run a mile.

One of my fellow classmates stepped onto the hot asphalt of the track field wearing our standard gym uniform: a white t-shirt and red gym shorts rolled up a little to accentuate her curves. She completed the ensemble with a pair of Melissa Love Grendene Jelly Sneakers that looked like they had seen better days.

There was a layer of dirt under the once see-through plastic. The laces frayed. And the white sole was now gray.

It wasn’t a good look. Still, I had to admit, her feet probably felt amazing running in them comfortable ass shoes.

At this point, in the summer of 2005, I had retired my own Melissas. But then, and still today, I reflect on them fondly. They were the “it” shoe for so many Black girls around me and across the nation in 2002. In the decade and some change that has passed since then, I’ve wondered what was it about Melissas that made them so popular with Black girls.

How did a Brazilian-based shoe company, Grendene founded in 1979 manage to connect with Black girls here in the United States?

Maybe it was the bright, eye-catching colors. Or the fact that a few years before we started snatching these shoes off of shelves, rapper Nelly told us he was a sucker for manicured toes. And in the spirit of “pick me,” the girls with pretty feet wanted to show them off.

The shoes were certainly marketed toward our demographic. Melissas were sold in stores like Journeys and with a retail price of around $40, they were more affordable for a wider range of Black girls, unlike other brands.

But if I had to point to one reason for the shoe’s popularity, it would be the fact that it reminded us of the jellies we wore in the 80s and 90s.

The clear, see-through sandal, often infused with glitter, was a staple in many Black girlhoods. Like the Melissas, they were made of plastic, came in virtually any color you could think of, and they were also inexpensive. You could secure a pair of just a couple of dollars and sometimes just one. They weren’t all that comfortable. But they were shoes for children. We weren’t worried about arch support at the time.

There really was only one downside, they smelled terrible. It was a chemical smell that never really left the shoes and might have even transferred to your foot if you had them on for a while.

Melissas were the grown-up version of a childhood fave.

In fact, according to the Orlando Business Journal, Grendene was responsible for the original jellies we fell in love with, having introduced them in 1982 at the World’s Fair in Knoxville, Tennessee. While it wasn’t the first time plastic had been used to create shoes, it was the most successful in the marketplace. The idea was so popular, it wasn’t long before the Grendene design was being duplicated cheaply by discount stores all over the country.

Jellies developed a reputation for being “disposable” according to a Grendene national sales manager in 2002, Brad Gruber.

The Melissas were the answer to the cheap copycats. Unlike many of the jellies on the market, the plastic was more flexible, allowing a greater range of motion and more comfortability. And they didn’t stink.

In fact, Melissas smelled good. Each pair was infused with a bubble gum scent that lasted for months. Even when it did fade, it wasn’t replaced by a scent that raised concerns about toxicity.

It was a win-win and Black girls ate it up.

Interestingly, I cannot recall ever seeing a single White girl in our school wear these shoes.

They missed out but I’m glad Black girls had this moment of connectivity through our footwear.