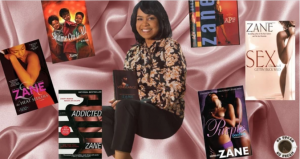 I’m obsessed with the phenomenon that is Black girlhood. There are so many beautiful aspects of what it means to transition into womanhood and Black womanhood specifically. The experience is as magical as it is mundane. I’d argue there was something particularly special about going through puberty as we entered a new millennium.

I’m convinced that millennials had to contend with sex in ways that no generation before us did. We lived through sex scandals from the highest office in the land. The rise of the video vixen. And the advent of the internet. All of it brought sex to our homes and in our faces like it had never been before. Being a preteen or teenage girl trying to navigate it all was…tricky.

It’s no secret that Black women and girls have been oversexualized since we were first brought to this country. The act of balancing the natural state of existing as sexual beings with societal notions about us being wanton, insatiable jezebels was and still is not only tiring but incredibly unfair.

Exploring and discovering one’s sexuality has the potential to be a rocky road. But doing it as a Black girl takes additional effort. If you were like me, you vacillated about who you wanted to be in all of it. With the influence of church, I wanted to be a good girl. Virginal.

But I was also the same girl who forced my godbrother into being my boyfriend at five years old. Boys and my attraction to them took up a great deal of space in my mind. And while I always wanted to be respected, there was no denying that I wanted boys to notice and like me romantically and sexually.

It’s no secret that Black women and girls have been oversexualized since we were first brought to this country.

Admitting such a thing as a prepubescent would have earned me the label we assigned to any Black girl who expressed any semblance of sexual desire: hoe. In middle school, we overused the phrase. It was lighthearted and jovial. But humor must be rooted in truth.

And the truth was that so many sectors of society: the church, our mothers, and even we saw ourselves as such.

Thank God for Kristina Laferne Roberts, better known as Zane. Zane’s rise as a dominant author of Black erotica coincided right with my own journey through puberty and the blossoming sexuality that came with it.

My best friend gifted me my first Zane book during our early high school years. The girls who read Zane books belonged to something of an underground book club. None of the adults questioned what we were reading. But if you knew the name Zane, you knew the girl next to you was indulging in literature of a titillating variety.

And the truth was that so many sectors of society: the church, our mothers, and even we saw ourselves as such.

As much as that was true for the characters Zane created, it was also true for her readers.

In reading Zane’s work, I saw Black women who owned their sexuality unashamedly. Reading her characters, I got to ponder what it might mean to embrace my sexual self instead of ignoring or demonizing it. I asked myself what I may want to try sexually–by myself and with a partner. I established some boundaries. And more than anything, I got to do it from the safety of my own mind.

This part can’t be overstated. Sexual experimentation is a vital part of most of our maturation. Still, with immaturity, lack of self-worth, and budding self-knowledge, this type of growth has the potential to come with steep consequences. It’s critically important that girls and especially Black girls spend time reflecting on their sexuality and sexual expression before they ever share it with someone else.

And you could do that with Zane’s work.

At the height of her popularity, there weren’t and there still aren’t spaces for Black girls to explore their sexuality safely and healthily. When we come across those places, whether in the physical or abstract, we have to honor them.

In reading Zane’s work, I saw Black women who owned their sexuality unashamedly.

Personally, Zane gave me another lesson I come back to over and over again decades later.

You may remember that for years, no one knew what Zane looked like. And in the absence of images, people’s imagination ran wild. Because she wrote erotica, readers crafted her in their own perceptions of sexy. It wasn’t until I saw her picture that I realized my particular image was fatphobic.

I’m one of those people who likes to replay and ruminate on all of the times I’ve said or done something morally bereft. My teenage reaction to Zane’s image was one of them. I remember telling the same friend who purchased the book that I was shocked to see what the real Zane looked like. My friend asked what I meant by that.

I said something to the effect of “Well, she writes about sex but she’s fat.”

Thankfully, my friend was there to check me. “Fat people don’t have sex? Fat people can’t be sexy?”

That’s all of the conversation I remember. I don’t know if I made excuses or was effectively shamed. If I wasn’t in the moment, I got the message.

More to read on CurlyNikki:

It was another thing Zane gave me. The opportunity to address my own notions about which type of bodies are deserving of sexual pleasure.

It wasn’t until very recently that I began to equate Fatphobia with antiBlackness. With the two inextricably linked, it’s no wonder that as I was grappling with accepting and embracing my own sexuality, I would have trouble extending that same grace to others society had similarly marginalized.

Thankfully, in her decision to release her work and then show up as herself, Zane helped to reaffirm the universal truth that pleasure is a birthright to us all.