How To Raise Pro-Black Kids: Reprogramming Your Anti-Blackness

By Jacqueline SamarooJuly 8th, 2021No Comments 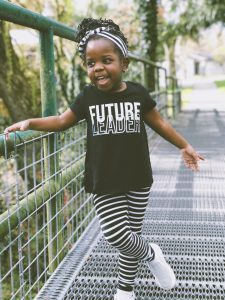 Photo by Kiana Bosman on Unsplash

How To Raise Pro-Black Kids: Reprogramming Your Anti-Blackness

Last year, Gabrielle Union shared an interesting anecdote on an Essence Festival panel about her sons and their preference for lighter-skinned women. When she asked the sons she’s raising with Dwyane Wade who were the women they found attractive, she noticed that they all looked the same.

“Literally, probably about 10 girls I looked at had the same light skin, curly hair, tiny waist, butt, boobs — it was the same girl over and over again.”

Union wanted to challenge them a bit.

“So I asked them to show me the most beautiful chocolate sister they’ve seen. They say there are none. I was like, ‘Why do they get exed out so fast? What is happening in your brain that is causing you to look at these women through a prism that is distorting their actual selves?’”

She continued, “They don’t see the beauty unless it comes from an actress or a supermodel or a video vixen. They have to have somebody else tell them that a chocolate woman is attractive for them to believe it.”

Union described the moment as a wake-up call for her. It let her know that there were some additional conversations she needed to have with her sons to ensure that their concept of beauty included women who shared their skin complexion.

The conversation reminded me of a truth I discovered long ago. There is this assumption among Black people that raising children in a household with two Black people is enough to instill cultural and racial pride in our Black children. And that’s just not the case.

I first noticed this concept with a young cousin of mine. He and his family lived in Arizona, away from many of the Black uncles, aunties, cousins and other family members. Ice hockey was one of his extracurricular activities. In Arizona, as you might imagine, he had mostly White friends.

One year, it seemed that my aunt became preoccupied with the idea of my dad, her brother-in-law, exposing my cousin to Black music. I can only assume she wanted this to be an intro into Blackness at large.

And while my dad did his best to play certain things, his general feelings were that introducing your Black child to Blackness by the time they’re in middle school is too little, too late.

In a world that has a lot to say about Blackness— with most of it being negative, as a parent you have to work early, actively and intentionally to counteract those messages.

The older I get, the more I realize the ways in which some parents did and did not do this work. And while it’s never meant that all hope of instilling racial and cultural pride into a child is lost, it certainly gives them a leg up in terms of being a healthy, well-rounded, confident person in a world that was designed to make them feel otherwise.

With the hopes of encouraging parents, future parents, aunties, godparents and the community at large to raise pro-Black children, I’ve spent the last several months interviewing psychologists, social workers, my own parents, and a few other people about what it means to raise pro-Black children. In the next couple of weeks, I’ll share some of the more insightful, practical and helpful insights from those conversations, in an attempt to make sure that the next generation loves their Blackness and in turn themselves.

For the first post of the series, I want to highlight a topic that came up repeatedly in my discussions. It was the idea of self-love, self-worth, and the value we place on ourselves through the lens of Blackness.

It sounds like a beautiful ideal. But with the messaging we receive from the media, from the community and from our own family members, it’s easier said than done.

I asked Chanda D. Griffin, LCSW, a practicing psychoanalysis in New York City, how parents, people who are concerned about Black children (and now that I think about it) even people who are trying to unlearn some toxic, anti-Black behavior can start to counteract the detrimental messages we receive about Blackness every day.

“My thought is that it starts first with their primary relationships with their caregivers. So if your parents are of color and if your parents are reflecting and mirroring a sense of value and worth to you, that is what you internalize as a child. It starts with the relationships you have with your initial community, which is your family. It’s important to bring more positive images to counter or balance the negative images you see in the media. And educating your kids on the history of African Americans. Not just African Americans, Haitians, African history, giving them positive role models to learn about, understand and reflect on these models.”

Dr. Linda Cedeño, Ph.D., a licensed clinical psychologist said that before we can model or present our children with positive images, we have to first make sure that we’ve examined our feelings about our own pro and anti-Blackness.

“First and foremost, how do parents feel about themselves? What are we carrying in terms of our own internalized racist oppression, or the trauma and stresses that we’re carrying? How do we love ourselves? How do we love our partner? How do we love each other? So if we’re concerned about our kids’ self-concept and self-esteem and self-worth, one of the most important ways kids learn is through modeling. Being loving overall to oneself in a holistic way, that’s first and foremost. Because if we’re stressed and we’re in pain and dealing with metabolized trauma, it’s going to affect how we show up for our kids and the things that they experience.”

We hear phrases like “do the work” all the time, so I asked Dr. Cedeño how should we go about evaluating our own trauma when it comes to anti-Black sentiments we may be harboring. She said it’s best to treat yourself non-judgmentally.

“I think one of the most important things is to approach yourself with a curiosity and a sort of non-judgmental stance because whatever is there, is there for a reason. Whether it’s protection, hurt…just be curious with yourself and I don’t think that you need to have the expectation that you’re going to be able to completely eradicate it. Because you can consciously say, ‘Ok, well I know that there’s nothing inherently wrong with my hair or my skin color or my African features if they tend to be more African or wherever they are on the continuum but there’s a little part of me contracts when I see this woman or these White people or whatever it is.

What can be very helpful is understanding where does this come from. It makes sense that we’ve all internalized it. It’s not a crazy thing. We’re all swimming in the same pond. It might be hard for people of color to admit that we actually carry that in our bodies. But that’s why there can be colorism operating and we tend to replicate what we learn via White supremacy. So it’s a useful thing to be aware. When this person said, ‘You’re not like them.’ or ‘Your hair is kind of curly.’ ‘You’re not that dark.’ We might say ‘I’m proud to be this or that.’ But a part of you might be like, ‘Ooh okay…’ And don’t hate on yourself because of that. There’s something sort of protective. Like, ‘Well, maybe I’m safer in the world.’ So be kind of welcoming and non-judgmental about that stuff. In some ways, you can laugh it off. It’s understandable. Be compassionate to yourself.”

From an early age, I had to battle with the notion that Black people were not as intelligent as White people. It’s hard to describe because, with all that my parents taught me about Black figures in history, I knew that wasn’t true. But I also knew that there were White people who believed this about us and treated us accordingly. So I can say that I spent much of my school career, from elementary to high school trying to prove, through my own academic achievements, that Black people were as intelligent, if not more intelligent than White people. It was so important to me that I can recall several instances of being ashamed or embarrassed by my Black peers who didn’t prioritize studiousness and obtaining good grades in the way I did. It was years before I would recognize that judging people, my people, in this way, trying to prove my intelligence to White people was a form of anti-Blackness.

Black intelligence just is. And what’s understood doesn’t need to be explained. The more I learn and grow, the more I realize that our intelligence exists in ways beyond the traditional systems of education we have in this country. And if White people can’t—or refuse to see that, it’s not a problem I should internalize as a reflection of my Blackness. It’s their racism. And truthfully, we’re more than what White people think of us.

Being compassionate in recognizing your own anti-Black thoughts doesn’t mean you allow beliefs that diminish Blackness, both yours and the community’s, to flourish. It means that you correct patiently, lovingly and practically.

Dr. Cedeño said, for instance, if there is something in you that believes that Black people are inferior, unintelligent or inept, “You might say to yourself, ‘Black people are just as capable as other groups.’ And then you find ways to affirm that. And you can affirm that in a number of ways. You can connect that to your own experiences in life. Or maybe you need to read about people who affirm that. So it’s about how you’re going to reprogram a particular thought or belief.”

The thought of reprograming can be daunting, uncomfortable and frankly, not fun. But considering the world that was given to us, the world we inherited, getting rid of the beliefs that don’t edify and affirm us and our Blackness is necessary if we want to ensure that future generations don’t have to do this type or this much psychological labor around loving themselves wholly.