When my brother told me that Issa Rae was a trending topic on Twitter recently, I was too pumped thinking the trailer for Season 3 of Insecure was released. Instead, I wasted precious seconds of my life searching the hashtag only to discover pure foolery.

Continue
An excerpt from Issa Rae’s 2015 book, The Misadventures of Awkward Black Girl, apparently made its way to Twitter thanks to a bored social media obsessed person seeking to get attention by starting this conversation. In a chapter of the book titled “Black Women & Asian Men,” Issa sarcastically advised black women to marry Asian men, which according to statistics, Asian men are an intellectual match to black women. If you know anything about Issa, you know she has a dry sense of humor and a personality that some would deem odd. Hence, the title of the book. But, of course, black men on twitter were in their feelings. They had the unmitigated gall to petition we boycott our beloved Issa.

You guys kill me. 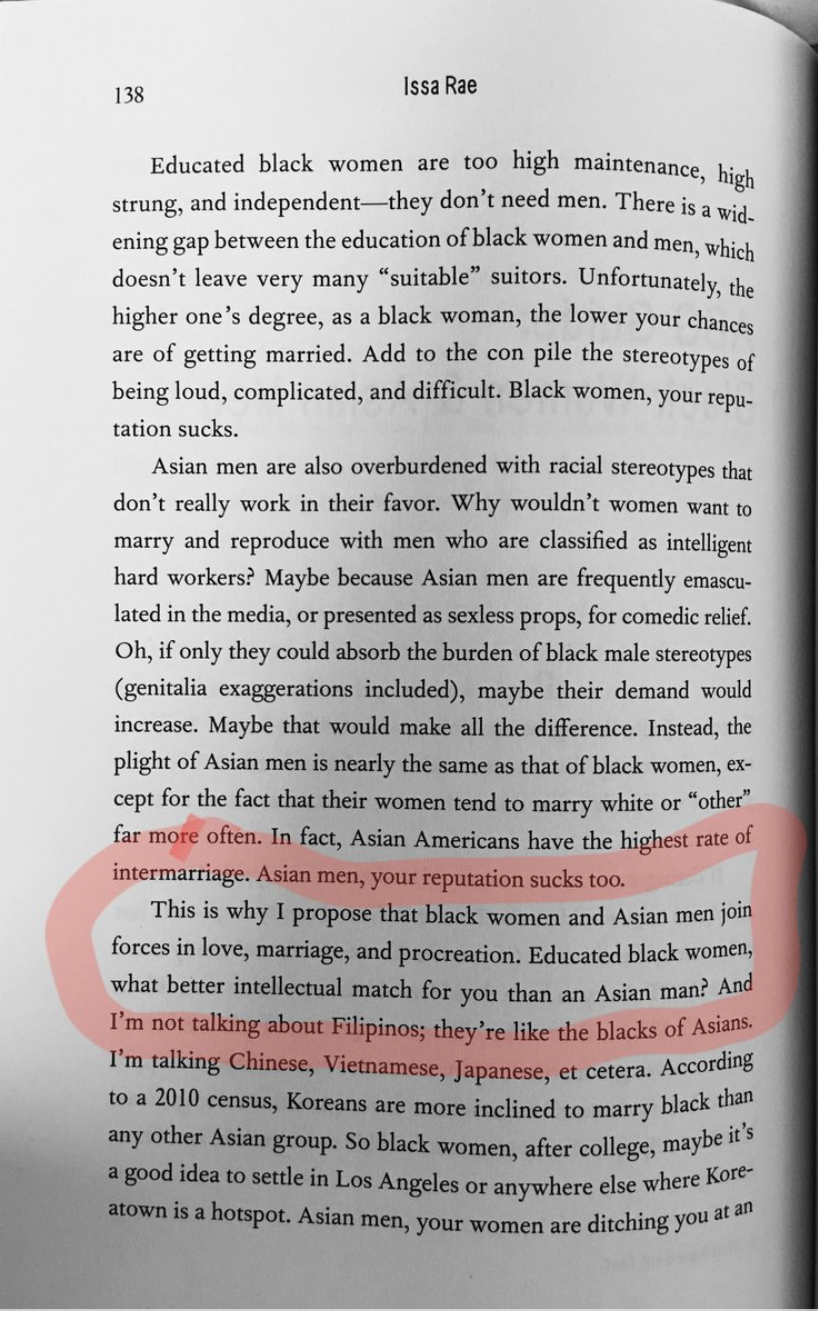 Text from The Misadventures of Awkward Black Girl by Issa Rae

My how the tables have turned. It doesn’t feel so good to be turned down by your own kind now does it? First things first, Issa Rae has been a champion for not just black women, but the culture in general. She’s been an example of cultivating one’s talent and turning that into a full-blown career from the ground up while setting the tone for originality and entrepreneurship. She’s employed black actors, men and women, giving them opportunities in spaces where we are viewed last (or in many cases, not viewed at all) and she’s been a voice for the black millennial 25+ woman on a tv show where our age group and struggles are normally ignored. After all of this, the one time a woman makes such a suggestion, men are calling us to boycott her. Why? Because, she sarcastically (yet with an undertone of truth) advised us to potentially expand our dating pool? Because let’s be real, a lot of black men may not be checking or stepping up for us anyways. So we should boycott her for giving us the advice to be open to other options so that we in turn don’t settle? Nah bruh.

We’ve been dealing with public rejection and disrespect from black men for decades. Whether it’s black women in general or colorism, where our men have boasted about which skin tone they prefer. Just recently, gold mouth Trick Daddy referred to us as “hoes” and told us to “tighten up” our bodies or we’d continue to lose black men to white and Latino women. Didn’t rapper Kodak Black say he “don’t really like Black girls like that” when commenting on KeKe Palmer’s skin tone, saying that darker skinned women are more difficult while labeling lighter skinned women as more “sensitive?” Even an old tweet from comedian Kevin Hart resurfaced where his joke about darker skinned women failed. Hell, taking it even deeper, K(oon)anye West just said that 400 years of slavery was a choice, which 100% abolishes the work that black women did to carry the black family on from generation to generation.

And shall we not forget the dozens of athletes who only seem to flaunt non-women of color on their arms on red carpets – the Peter Gunz and Stevie J’s of reality television who proudly display their love triangles with no remorse while hurting the women they claim to love in the process – the thousands of misogynistic lyrics in many hip-hop tunes that we twerk to over hot beats in the club – and the support of men who have been exposed as physically abusive and even predators? I mean the list goes on. Even MadameNoire’s online vlog includes an 8 minute video on why black men date white women.

Y’all got some nerve.

There are multitudes of amazing black men who root for us. Even the Oprah Winfrey Network has a lovely docu-series on black relationships titled “Black Love” that I thoroughly enjoy and cry tears of happiness when I see my people succeeding in happy, healthy relationships. I’m the QUEEN of #BlackLove. But, let’s not try and ignore the fact that in our culture, we’ve been dismissed.

So again, nope – I’m not boycotting Issa Rae. I actually commend her for her statement, even if it was with satire. Black women should have the right to date, marry, procreate and be proud to speak on other men BESIDES black men. Thanks for the advice Issa girl!

Do you feel that black women should expand their dating pool?