By BITCHES BREW BY ERICKKA SY SAVANÉJanuary 27th, 2021No Comments
By Veronica Wells

I was in fifth grade when Lauryn Hill’s Miseducation was released. I don’t think I could overstate what that album meant to me. It changed the game for me (I would learn later, so many other young, Black women.)

A year later, during a family reunion—where we ended up in Vegas— I saw that Lauryn Hill was performing there, the day after we would have already left. I stood there on the strip, staring at that illuminated marquee, somehow knowing that I was missing something magical, some once in a lifetime event. As you know, Lauryn Hill is still performing her classic album. But if I wanted to hear what I fell in love with, the best chance of that would have been in 1999.


This past week, Ms. Hill performed in Toronto for one of the dates for her The Miseducation of Lauryn Hill Tour. According to HipHopDx, Hill showed up over an hour late and performed for only 45 minutes. Several concertgoers claimed that she spent most the time rushing her band members and rushing through 10 songs before ending the set with a rendition of Drake’s “Nice For What,” which samples her single “Ex-Factor.” 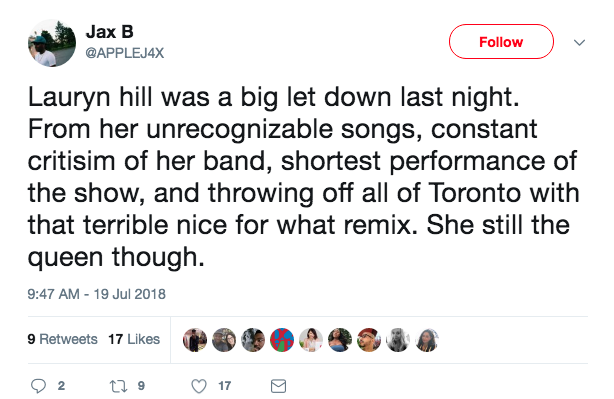 As a fan of Lauryn’s music, who will always regard The Miseducation as genius work, I have one thing to say to these people who bought tickets to this show, arrived to the venue on time, waited for an hour and sat through a terrible set. It’s the same thing my momma used to say to me after I defied her repeated warnings. “Maybe now you’ll learn.”

It would be different if this was the first time Lauryn had pulled something like this. But this has been her modus operandi for years now. In fact, showing up only an hour late, is an improvement. After one particular bad showing, Hill offered an explanation for her tardiness.

“I don’t show up late to shows because I don’t care. And I have nothing but Love and respect for my fans. The challenge is aligning my energy with the time, taking something that isn’t easily classified or contained, and trying to make it available for others.”

This was just an excerpt from her explanation written in 2016.

#PressPlay: Yikes a fan went off on #LaurynHill for apparently being 3 hours late to her show
A post shared by The Shade Room (@theshaderoom) on May 7, 2016 at 7:41am PDT

If y’all still buying tickets to her shows after that, it’s on you. In the words of Maya Angelou, “When people show you who they are, believe them.” And Lauryn not only showed us, then she told y’all she’s not going to be on time.

For the people who are still buying tickets, expecting anything else…I have no choice but to assume you enjoy being gaslit.

Going to a Lauryn Hill concert with expectations of professionalism and general decency is like dating a man who said he wasn’t ready for a relationship, expecting to get a ring. It’s like marrying T.I. and expecting fidelity. Hanging out with Snoop Dogg and expecting sobriety. Conversing with Kanye West and expecting him to honor the ancestors.

In the words of Drake, “You knew what it was when you signed up.”

At this point, I’m convinced folks are purchasing Lauryn Hill tickets just so they can complain about how terrible the show was. Or maybe they’re doing it as some form of community service, given Hill’s infamous tax issues. If that’s the case, then, perhaps, the disappointment is easier to take on the chin. But at the end of the day, you have no one to blame but yourself if you leave a Lauryn Hill concert pissed and she leaves paid.