I’ll never forget my homeroom teacher Mr. Litz and the thoughts he shared one day about Black hair. In addition to home room, Mr. Litz, a White man, was also my middle school art teacher. And during his explanation of how he recreates Black hair, he told us, his predominately Black class, that Black people’s hair was inherently thin and weak.

I remember us, the Black kids, looking around at each other like, “Ain’t this some sh*t.” But none of us said anything to address his ignorance.

But I would learn that White men like my art teacher weren’t the only ones who carried false notions about Black folks and our hair. When I introduced my cousin to two friends, she immediately asked me whether they were Black. They were visibly Black, so I laughed before saying, “Yeah.” She repeated herself, “Are both of their parents Black?” I said “Yeah and their grandparents too.” Surprised, she paused for a moment before saying, “I just thought they were mixed with something because I’ve never seen a Black person’s hair that long.”

Throughout my life, I would hear Black folk make these type of comments. One friend just knew that a mutual college acquaintance was going to have a son who had “good hair” because her husband was White. I’d heard these myths of people who talked about “good hair” but to hear it from someone in my age group was startling. After all, we were in the midst of the “Natural Hair Movement.” Sisters everywhere were growing out or hacking off their relaxed ends in favor of their natural kinks and curls.

In all honesty, even the Natural Hair Movement wasn’t without its flaws. The mainstream, commercialized and widely accepted representatives were often women with light skin and 3C curls. Hair that bounced instead of hair that fluffed. I can’t tell you the number of women I heard openly coveting that type of hair, scouring the hair care aisles looking for thee product that would magically change their genetics and hair texture.

Gradually though, I started to see women getting the message, accepting themselves and their hair, learning what they could do with their tighter coils, their thicker locs. I saw more and more tutorials on how to style—and more importantly how to moisturize 4C hair.

But every once in a while, despite our culture’s slow movement toward self-love and complete acceptance, there are moments when I realize we’re still holding on to old, negative beliefs about our hair and its possibilities.

When Beyoncé’s hair stylist Neal Farinah posted this image saying that she rocked her natural hair at the On The Run II stop in Rome…or in his own words: Twitter blew up with folks who doubted the possibility, vehemently. 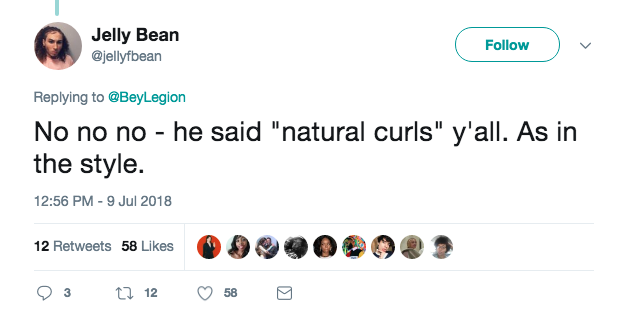 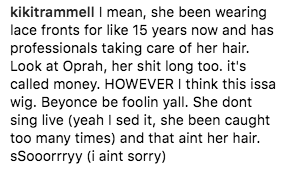 Personally, I believe it’s hers. Only because Tina Knowles Lawson, Beyoncé’s mother, has a similar texture and quite a bit of length— in her sixties. And months ago, she shared this image of her daughter’s natural hair.

This isn’t about convincing anyone. It’s about the stereotypes and negative beliefs we’re still holding on to when it comes to Black hair.

Just the other day, I heard a Black person wonder aloud, “Why did God give us hair like this?”

If we’re still asking questions like that, I think we can acknowledge that there is still a way to go. Still, to her credit, the woman who asked this question does wear her hair natural–even if she’s not entirely convinced of its beauty.

And for all the ignorance and mainstream messaging we’ve received over the years, I’ve noticed that Black women are making more strides to embrace natural textures. The other day, my fiancé and I were at an Afrobeat party and there were plenty of women who wore their hair or natural hair textured wigs/weaves to the club no less. Plenty of Black women have been wearing their hair naturally for a while now. But seeing these type of styles in the club, where so many women are trying to look and feel their sexiness, sends a message that we’re not all the way there yet but we’re certainly on our way.

Do you feel we still hold a lot of negative beliefs about our hair?