From Tennis to Fashion to Motherhood: 5 Reasons Serena is Owning the Media

Serena Williams is #Goals…in every way. She’s fit physically, strong mentally, a pioneer in an industry that never saw it for black women and she comes off as an overall kind human being – which is hard to come by in life. Adding the titles of wife and mother have brought out a new side of Serena that fans were never privy to. She’s become more confident, not that she ever lacked in that department, at least not when it comes to the game of tennis. But, there’s a new layer of confidence to her now. She speaks her mind and shares her experiences to be an example for others, and it’s working. Just this week alone, she’s made headlines for everything from sports, to parenting and being a bomb woman. Here are 5 reasons why Serena is killing it. Who knew that a fitness jumpsuit would be considered “too much of a distraction?” Apparently, the male powers that be who run the French Open. Nevermind the fact that the late, great Flo-Jo wore one legged catsuits in her day and remained on top of her game. After wearing a NIKE bodycon catsuit during a match, Serena was told that they’d be banned at future games. I guess a black woman’s curves is overwhelming to the eye. Adding insult to injury, it was revealed later that Serena wore the custom designed one-piece for circulatory support after having surgery to remove multiple blood clots following a C-section. But like a boss, Serena remained unfazed, showing up on the first day of the U.S. Open rocking a custom-designed black tutu, a collaboration between Louis Vuitton designer Virgil Abloh and Nike, with those thighs and all of their amazing thickness out for the world to see. She showed up, showed out and of course added another win to her multitude of wins. 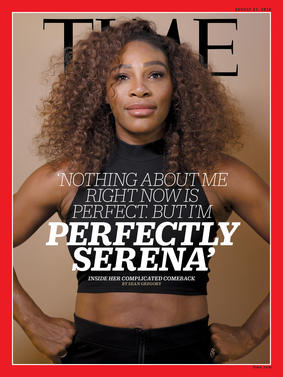 Those biceps and toned stomach are on full display as the tennis great graces the cover of TIME Magazine. But, what’s most impressive is her ability to be honest and vulnerable about her experience as a known legend in the sport she’s dominated for her entire career and how her ability has been affected since becoming a mom. Despite losing a recent match, she expressed her intense desire to get back on the court just 5 months after a life-altering birthing experience to inspire other working moms. “I dedicated that to all the moms out there who’ve been through a lot,” she said during the interview. “Some days, I cry. I’m really sad. I’ve had meltdowns. It’s been a really tough 11 months. If I can do it, you guys can do it too.” Ever the determined one with a winning mindset, she refuses to allow one loss to define her. “I’m not done yet,” she said. “My story doesn’t end here.”

3. Non-conforming to Traditional Ideas of Motherhood At a press conference surrounding the U.S. Open, Serena explained why she and husband Alexis Ohanian aren’t planning a party for their daughter who is set to turn 1 this weekend. “Olympia doesn’t celebrate birthdays,” said Williams. “We’re Jehovah’s Witnesses, so we don’t do that.” While many would cave into what the world feels one should do for their child, she stands true to her roots and beliefs. She also shys away from gender roles when it comes to parenting, enlists the help of her mother with caring for her daughter (using a nanny as a last resort), and takes baby Olympia with her when she travels. I’m jealous the baby has more passport stamps and IG travel photo opps than me. Go Serena for giving Olympia a head start on becoming well-cultured!

4. She Stays Grounded Through Her Family

If you don’t dare to try and chase your dreams, you’ll rob yourself the joy of doing it. Don’t just dream it. #JustDoIt
A post shared by Serena Williams (@serenawilliams) on Aug 27, 2018 at 8:04am PDT

We all know that her father coached her to become the G.O.A.T. that she is and she makes it a point to to keep her family close to her. She posted several video montages as part of her partnership with NIKE this week, giving viewers a look into her journey to greatness. In one of the videos, her father is seen training her with the goal of her one day competing at the U.S. Open. Instilling those seeds in his daughter manifested into 72 career singles titles, 23 doubles titles and two mixed doubles titles. Despite her success, she documents her close familial ties almost daily with photos and videos of her parents and sister.
5. She’s a Champion for Gun Control
Share what you love about Serena!