We have all heard, or watched, the multi-day memorial plus 8-hour funeral in celebration of our beloved Aretha Franklin. Her life and legacy goes far beyond music. As Rolling Stone put it, “Aretha’s voice sang across decades of change and turmoil for black America.” Her mission outside of music to fight for the advancement of our people will be forever cherished and integrated in history books beyond her vocal catalogue. The musical tributes and eulogies were for the books, but analyzing it from a conscious standpoint, you’ll come to realize just how monumental her death is. As a pioneer in the fight for black freedom and equality, Aretha was no ordinary entertainer. Here are the ways in which Re-Re’s passing brings our ancestry full circle.

Her memorial date (August 28) was the anniversary of three key moments in history: 1. I Have A Dream
Probably the most studied and recited speech of all time, Martin Luther King Jr. delivered his famous and legendary “I Have A Dream” speech during the March on Washington on August 28, 1963. The speech is known as the defining moment of the Civil Rights Movement but what’s even more interesting is that the leader of one of the most pivotal movements of our history had close ties to the greatest vocalists to cross generations. R-E-S-P-E-C-T was released in 1967 and classified as the anthem of the civil rights movement. King and the SCLC awarded her with her own day, “Aretha Franklin Day,” which was approved by the city’s mayor, for her efforts during the movement. Ironically, King was killed in Aretha’s hometown of Memphis, TN. She honored him with a rendition of Precious Lord, Take and at his funeral and claimed that the time she traveled with him during the voting rights campaign changed her life. 2. Obama Accepts the Presidential Nomination in 2008 for the Democratic Party
Our President Barack Obama said that she “rocked the world of anyone who had the pleasure of hearing her voice” in a letter that was read during her funeral. He would know, as he requested her performance during his inauguration in January 2009 and witnessed the magic of all that is Aretha Franklin. How ironic that on the anniversary of his democratic acceptance speech for presidency, one of her memorials was held. 3. Emmett Till’s Lynching
The story of Emmett Till will be shared from generation to generation and is known as the incident that triggered the Civil Rights Movement as a whole, a movement that Aretha lent her finances and time to support. Till was 14 at the time of his lynching. With the Queen reportedly having two sons by the age of 16, I’m sure his murder resonated with her from a maternal standpoint and made her want to be involved in creating real change.

Not your average hearse 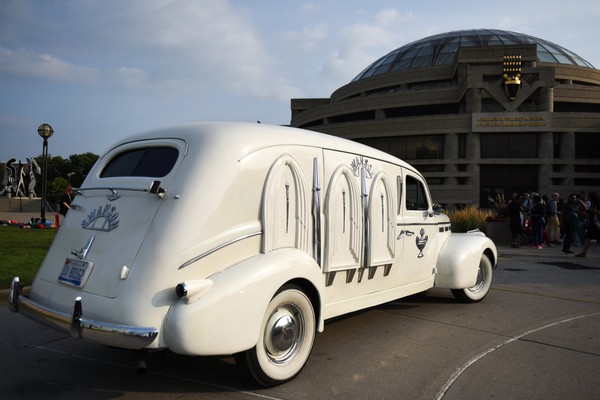 The ivory, two-door 1940 Cadillac LaSalle that transported Ms. Franklin’s body to and from the memorial and funeral also transported her beloved father, the legendary pastor and civil rights figure, Rev. C.L. Franklin, during his services in 1984. That same hearse carried musical icon David Ruffin of the Temptations in 2005, whom Franklin crossed paths with during her work with the movement. Her services were held at the Charles H. Wright Museum of African American History, the same place where Rosa Parks’ public memorial was. With her close ties to important moments in our history, it was only fitting. Interestingly enough, Aretha was raised and loved her life in Detroit, the motor city and home of Motown Records, the birthplace of chart topping black soul and pop music. Ironically, Aretha never recorded as a Motown artist. She did however perform at the 20th Anniversary Special for Motown. To solidify the world’s love for her even more, over 100 pink Cadillac’s filled the streets outside of her funeral as an homage to her song “Freeway of Love” where she sings about cruising in a pink Cadillac. Not bad for a woman who would stay loyal to the motor city until she passed. Notable Attendees
Aretha Franklin’s funeral was reminiscent of the guest list of Oprah’s Legend Ball, just with men. I remember watching that ball in my tweens and was so moved by the black elite in entertainment, education and politics and yearning to make that type of impact. Obviously, Aretha did. Because when you attract former Presidents, Civil Rights leaders, evangelists and beyond – you know you did the damn thing. Everyone including Bill Clinton, Maxine Waters, Cicely Tyson, Stevie Wonder, The Clark Sisters and throwing in the youngins Jennifer Hudson (whom Ms. Franklin personally requested to play her in her biopic) and Fantasia. Anyone watching better had been in front of their TV sets in their Sunday’s best with a handkerchief across their knee and a church fan because Re-Re deserved such!

Do you feel our legendary Aretha had a proper home going? Brenda is a Philadelphia native with a love for Marketing, Creative writing, wine and Jesus. Her work has been featured on Mayvenn’s Real Beautiful blog and she is the co-author of the book Christmas 364: Be Merry and Bright Beyond Christmas Night (available for purchase on amazon). Follow her on IG @trulybrenda and trulybrenda.wordpress.com