When Keeping it Hood Goes Too Far: Cardi B Vs. Nicki Minaj

So Cardi B decided to interrupt the Harper’s Bazaar Party during the fashion industry’s premiere celebration of New York Fashion Week for a full-on old school street fight with Nicki Minaj. I knew nothing of this beef, but I digress. What’s more important here is that I’m disappointed that once again, my people cannot handle themselves amongst the Caucasians.

Continue
Considering that there’s always apprehension to invite us to certain “upscale events,” specifically rappers and the not so soft version of R&B singers and reality stars, this incident furthered the negative perception that we don’t know how to act. The most you hear about a Fashion Week attendee is that they may have a little too much to drink. Or, during film award season, someone may say something out of term during an acceptance speech. But never have I heard of an entire brawl. They done bought the hood to NYC Fashion Week.

Sis, we are in mixed company. The legendary Anna Wintour was somewhere with her bob and enjoying a glass of Prosecco while you couldn’t resist yelling expletives and throwing your Versace shoes (or whatever brand the shoe was) across the room at your rival? A rival that either no one knew existed or at minimum, whatever spat you guys had was squashed per your recollection just months prior.

Cardi you are no longer that girl who has to put on for reality television cameras. You got out. You were one of the lucky ones. You are now in rooms that those same girls act a monkey ass in every other scene, hoping to get the type of access and opportunity you are awarded. You claim to have left Love & Hip Hop for the very reason of not being in situations in which you are forced to behave in certain ways, only to be a wanted guest at America’s beloved fashion event to relapse into the same stereotypical behavior you ran away from.

There’s a time and a place for everything, and a Harper’s Bazaar party during NYFW is NOT the time nor place. This is an unfortunate example of the old saying, “You can take the girl out of the hood but not the hood out of the girl.”

I don’t care what provoked such. Unless Nicki lunged or put her hands up
as if she were to fight Cardi, then this is unacceptable. Cardi needs a
lesson in, “Sticks and stones may break my bones but names will never
hurt me.” And all of that to not land one punch and YOU walk away with a
knot on YOUR head from someone trying to stop you from hitting her. In
hindsight, was it worth it Cardi? 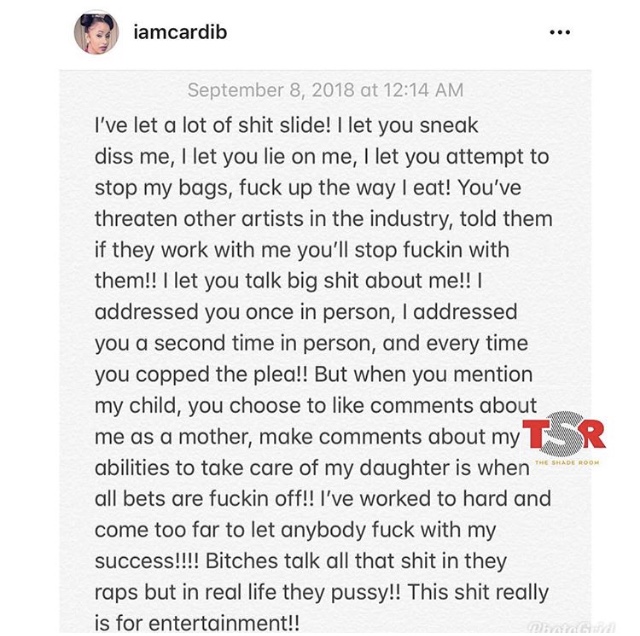 What Nicki is being accused of doing is nothing more than what Lil’ Kim and Remy Ma have claimed, it just hasn’t escalated to them putting paws on her. Nicki has even tried Mariah Carey by attacking her verbally and threatening to fight her, so we know she’s missing a screw or two and at worst has no respect for the legends.

But, even Remy had the sense to rap about it in a more productive way by releasing the Shether diss track and air her grievances in an educated fashion in interviews as opposed to clocking her on sight at a public event. And even Solange was smart enough to go kung foo panda on Jay Z in an enclosed elevator versus on a red carpet at the MET Gala. Did she anticipate a tape of elevator-gate being leaked to TMZ? No. But had it not been for a money hungry surveillance agent, we would have never known it happened.

I’m not saying that Nicki doesn’t deserve a gentle slap across the face from someone for the constant shit talk she does and the alleged underhanded activity she does behind the scenes. Even recently, she blamed what she considered to be lackluster album sales and losing the number one spot to Kylie Jenner’s promotion of Travis Scott’s project.

I’m not an advocate of violence of any form, specifically amongst black women. However, I’m not naive to the fact that if you talk smack you’ll eventually run into someone who’ll match that with their fists to teach you a lesson.

Either way, we have to do better, both verbally and physically. We need to be cautious of what we say to one another and we also need to get to the point where we understand that retaliating with a kick, curse word or weapon helps none. The English vocabulary is broad. Let’s make better use of it. Furthermore, let’s not ruin the chances for those coming behind us because we can’t handle conflict as adults. Let’s see who gets an invite to next year’s Harper Bazaar party. Smh.

Do you think we’re expecting too much from rappers when it comes to keeping it classy?